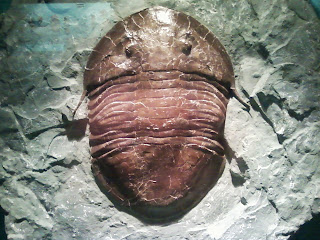 While swimming Thursday afternoon I met three booksellers, members of the ABA and attendees at the Winter Institute. I tread water while these women from Illinois, all owners of independent bookstores, asked me about Color Plates. Thus began (for me) two days in the mighty Crystal City of being introduced to booksellers. A few hours later I joined Meg Taylor (from SPD) and Abby Beckel in a ballroom occupied by authors signing their new books for booksellers. We did our best to politely ingratiate ourselves with the crowd. The crowd was kind to us. We took a few books. I did meet Tim Wynne-Jones and he was eager—eager!—to speak with me about Nightfall and the Bay of Fundy. Afterward, a quiet Chinese dinner with Meg and Abby.

Written on a plaque in the Smithsonian Museum of Natural History: “…using its front teeth and claws, this palcocaster dug its burrow in soft sediment. After its death, sediment filled the hole and preserved the beaver’s skeleton.” Behind the glass a corkscrew of stone—a petrified tunnel—that culminated in a burrow full of its maker’s fossilized bones. I found this affecting. I spent half of Friday in the museum, and most of that time among the bones of prehistoric mammals. I was similarly affected by a phrase that finished the Museum’s narrative on the evolution of horses: “…merely the current stage in a long and complex evolutionary history.”

All this and reading Andrew George’s translation of The Epic of Gilgamesh—now my favorite of the translations I’ve read—put me in a peculiar frame of mind for my second night of the ABA’s Winter Institute, where I was scheduled to autograph copies of Color Plates for booksellers. I had no idea what to expect and was surprised when people eagerly came up to me, already excited about CP, and in some instances urging me to come read at their store. We ran out of copies before we ran out of interest. Much of this excitement was due to a presentation Meg gave Friday morning—while I was sitting in the shadow of an Irish Elk, wondering (as I often do) about its antlers.

Ralph Nader sat next to us and signed copies of his book. He and I did briefly touch on the subject of our (essentially) two-party system, but he was preoccupied by a sour stomach. Bad cream, he thought. Ginger ale and cheese, he thought, would settle things nicely. I’m wasn’t so sure. Ginger ale, yeah, but cheese? He also praised a set of legal books, designed to help non-lawyers navigate the law. You know, write your own will. The three of us were invited by the publisher to join Mr. Nader for dinner, but he and his publisher left a couple hours before we could, so—a missed opportunity. Mr. Nader seemed exactly as he seems on television, etc.

Saturday, today, I went back to the Natural History Museum. I considered my many other options, but realized I wanted to be there, and in those thoughts. I was particularly interested in the “mammal-like” reptiles. Dimetrodon! My brother! I dwelled a long while beneath the prehistoric whales—the subject of one of my better elementary school papers. (I fondly recall an afternoon spent in the Boston Aquarium library, photocopying papers on the subject.) I confirmed that I like crinoids. I will write a slim volume about crinoids.

Perhaps in a few years I’ll be autographing copies of my crinoids monograph for booksellers attending the Winter Institute. Perhaps in a few million years someone will put my bones in a museum.
Posted by Adam Golaski at 12:06 AM