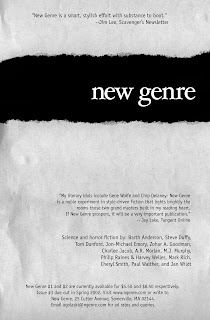 I am currently reading a review copy of a new horror anthology, preparing notes for what will be a negative review. The book itself is physically attractive. The cover is a throwback, but it’s meant to be. The authors include one major literary figure, and about half a dozen writers considered to be among best fantasy writers alive (considered by fantasy readers/writers, at least). Some of the more minor names still stand out, too—many have published fantasy work for more than a decade.

Which makes all the more distressing how bad this anthology is. I cannot believe that the editor edited. A few of the stories are good, two are very good, but most range from mediocre to bad. Bad how? Filled with cliché language and other symptoms of lazy writing. Good ideas squandered by lack of development—flat characters or narrative too rushed to develop properly. Most of the stories needed an editor’s involvement and I can’t believe the editor of this anthology was involved. A few of the stories are not publishable—one of these by an author who has written what are considered to be horror fiction classics in his decades-long career.

This anthology is an embarrassment. Another embarrassment. Too much that is mediocre in horror fiction is praised as the best by its readers, and too much that is bad is published. This is why it is perfectly reasonable for a reasonably informed, intelligent reader to conclude that horror fiction rarely (if ever) produces worthwhile literature. We can’t keep pointing back to Poe, to Hawthorn, to James, etc. and expect to be taken seriously.

I don’t have a lot of hope that things will change. Too many of horror fiction’s influential tastemakers are unreliable and unsophisticated. I am always grateful when good work is done, and there is good work. (Much of it written oblivious to what I think of as the horror fiction community, some of it coming from within.)

When I write my review some names will be named but I’m not interested in that now. What’s important is that horror fiction can be serious literature, but the genre as a whole will never be taken seriously unless it gets serious about itself. I’m close to not caring if it ever does, but I’m not free yet.

Issue #7 of New Genre isn’t ready. That’s why I haven’t published it.
Posted by Adam Golaski at 11:58 PM