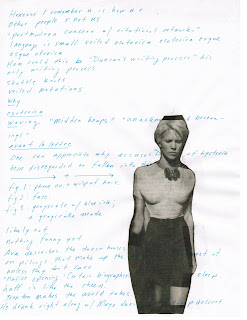 John Cotter and I read to a handful of people at the Center for Social Justice in February. In Albany. John brought strange wine. I tried a shortcut across a snow-covered vacant lot but was stymied by a precipitous drop. I read February newspaper notes (above, a page from; the first two lines transcribed from text messages sent to myself just prior to a reading by Abraham Smith).

Our hosts were Anna Eyre and James Belflower. I read James’ book and wrote him, “Yr Commuter arrived today. Sat down to read a few pages and read the whole book. Good to read it in one sitting. The bomb-narrative carries the reader thru and tends to generate the most poignant moments, but of course some of that is juxtaposition, honeymoon and lost limbs, for instance.” And, “this poetry comes at just the right time. I think it and Anna E., and some other poetries may save me and push me deeper into what I began with what I read in Albany.”

And indeed. Anna asked me and John to send poems for Barzakh, a new journal out of the English department at the University at Albany, SUNY. We did. The new issue was posted a few days ago. Anna telegraphed from Alaska to tell me. From co-editor Sarah Giragosian, “Barzakh wishes to consider in what ways traditional and experimental forms may provide an efflorescent zone for marginalized communities.”

John’s “Rus in urbe” is one of (I believe) a chapbook length ms. of Norwich (CT) poems. The river that is “blue one day and gold the next” features in other of his Norwich poems, such as “They Want to Convert the American Finishing Company”: “While your poison colors / streaked the river / Norwich ate hearty, / woke up early.” Anne Gorrick’s “When Noon Wears Ermine” is dedicated to Lori Anderson Moseman; Flim Forum Press will publish her next. The Evie Shockley poem “ode to the taxicab” moves vivid, “which candles night’s feast of onyx / and jet…”; an interview follows. My selection is from a long poem called OUTLAND. OUTLAND is dedicated to the poet Jessica Smith.
Posted by Adam Golaski at 4:45 PM