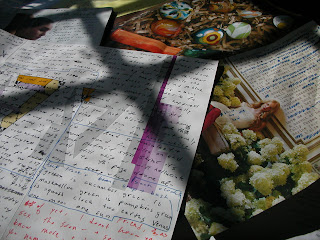 My youngest and I strolled downtown New Haven on Mother’s Day. We spent a lot of time at the Yale University Art Gallery. There’s a lot of open space on the main floor, where she wandered between a Sol LeWitt and a cuneiform tablet from the palace of Assurnasirpal II.

While I stood by the glass doors leading to the museum’s barren sculpture garden, one of the staff—a young woman—asked me, “How old?” My youngest tapped the covers of all the books faced-out on a low shelf behind a green couch. “A year,” I said. “She’s so cute.” I thanked the woman. She said, “Have you seen the horn?” I wasn’t sure I’d heard correctly, but before I could ask the woman to repeat herself she added, “Sometimes it’s a very bright red.”

A big photography book fell from the low shelf. The noise startled my youngest, who cried. I swooped in to soothe her. By the time all was well, the young woman was gone. I didn’t think about her or what she’d asked till now, now because I’ll be back in New Haven this Thursday.

I’m on to give a reading at The Poetry Institute. Doors open at 6:30. There’s an open mic at about 7 and then, after “a short social break,” I’ll read. I gather after that there’s a “feature poet Q&A.” I have new work, and hope to write more between now an then.

Maybe I’ll have time before the reading to revisit the museum. I’m almost certain the woman wasn’t asking me about an exhibit, but what else would she’ve been asking about?
Posted by Adam Golaski at 11:21 PM