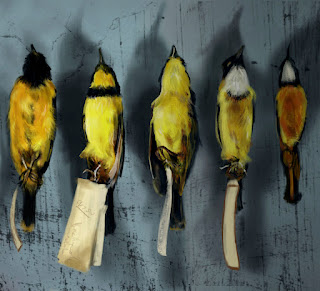 My notes for an afterword to Brian Showers’ Old Albert begin, “Faded place names. Terraces built on the back of a bird’s wings”—and continue for ten pages—“Hell-fire scholar,” “Mr. Walker’s tongue,” “The last fields of Rathmines,” etc. These notes were a test. Until I wrote them, I wasn’t sure that I could write an afterword for Brian. That was February. I struggled with various ideas until May, when the first line, “Old Albert doesn’t add up,” was written. All a rush, I wrote most the rest at a table outside the Harvard University law library. It was cold but sunny, and I had at hand a cup of coffee.

Since Rosalie Parker’s The Old Knowledge, I’ve happily supported Swan River Press, always delighted by the look and interested in the contents of the little hardcovers Brian publishes. And quickly: since 2010, six titles with a seventh on the way. It’s satisfying to be in one of those books.

Furthermore, I love the story. Loaded with strange moments that don’t all “add up,” its power lies in its dynamic range: quiet, a barrel full of human bones, quiet, a seagull pecking at a corpse. For those already familiar with Showers’ work, it’s also worth noting that Old Albert is a piece of The Bleeding Ghost, Brian’s first book. If you like, you can reinsert it, like slipping the Beatles’ “Her Majesty” back in between “Mean Mr. Mustard” and “Polythene Pam”; but like “Her Majesty” it’s a fine flourish on its own.

People who preordered the book were entered into a drawing; the ten winners were sent original pages from the (many) notes I made while working on the afterword. I signed each original using a glass pen dipped in blue ink.

The print run is small and Swan River Press titles tend to sell out quickly. Here is a review in which my afterword is briefly (and accurately) described: “Adam Golaski stretches the antique, ectoplasmic finger of ‘Old Albert’ to the present day with an equally intriguing, if less economic, ‘anecdote.’”

The image above was painted by Jason Zerrillo; it appears on the Old Albert dust jacket.
Posted by Adam Golaski at 10:37 PM