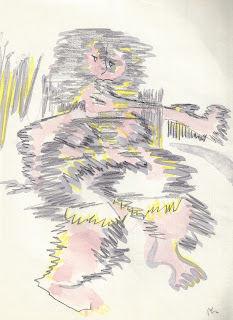 Saturday, in Davis Square, Somerville, Matthew Klane and I got up on stage together and read from The Problem of Boredom in Paradise: Selected Poems by Paul Hannigan. Matthew read short pieces, including the first poem of Hannigan’s I ever read: “Bringing Back Slavery // I think we should have a parade for it.” I read “Homage to Toth,” a long poem of reactions to the 1972 hammer attack on Michelangelo’s Pieta. I could have used a rehearsal, but the response to our reading was positive.

Ethel Rackin, who read for Parlor Press, and Travis Macdonald, for Fact-Simile, were among those who expressed especial interest—in Hannigan, and in the project itself. I noted in my introduction to the Selected the comfort I felt one evening when I imagined someone doing for me what I was doing for Hannigan; Ethel had the same thought, and I bet other poets in the room did too.

When DeWitt Henry, a founder of the literary journal Ploughshares and a contemporary of Hannigan’s, saw the Selected, he was quiet a moment, then excited. He had ideas—how to get the word out, who’ll be interested. On Thursday I sat in on a panel to honor Henry’s long career. I took two courses with him as an undergraduate. Both were important to me: an advanced writing seminar and a course called literary editing—the latter a primer for New Genre, which led me to Flim Forum Press.

Song Cave, another little poetry press, released A Dark Dreambox of Another Kind: The Poems of Alfred Starr Hamilton. Also a recovery project, I’m told. Jane Gregory read from it and from her own book My Enemies at a reading with Fence and Triple Canopy. She was good.

I started to assemble the Selected in 2007 and finished just months ago. I'm relieved it's in the world.
Posted by Adam Golaski at 1:12 AM