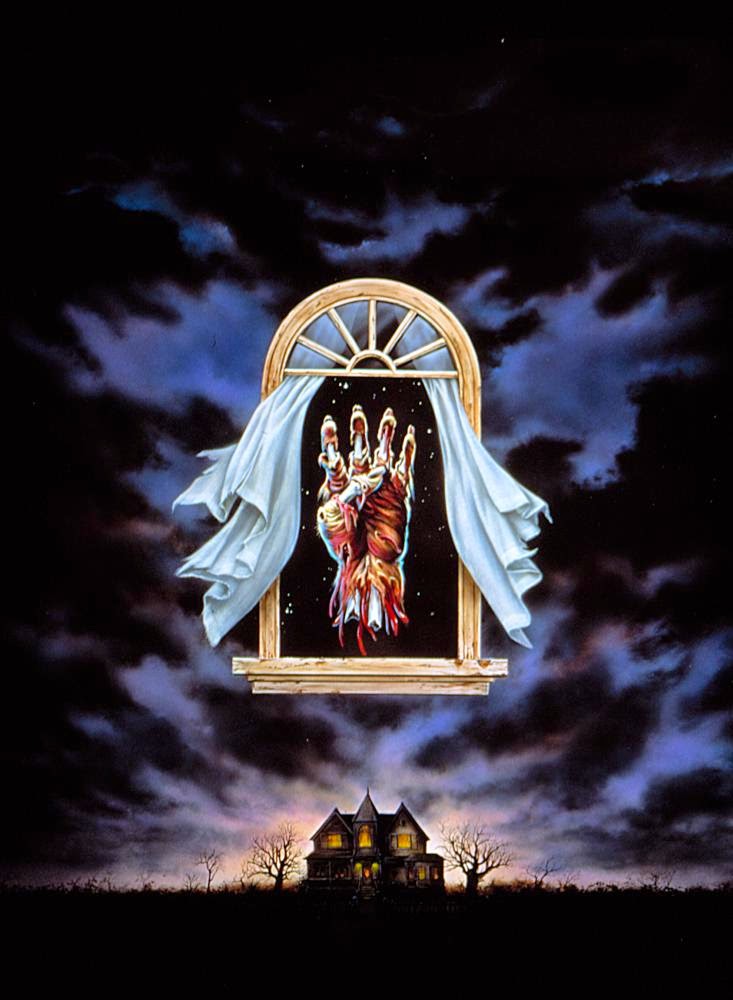 The Great Spirit knows a) the house houses a portal to Hell and b) the car accident is no accident. Crispy Roger Cobb dies in a burn ward; his wife grieves and worries about their daughter’s ruined stems. Most unexpected: Mrs. Cobb inherits the house and won’t sell “You don’t want that it’s broken” Al the plumber’s weak heart: no foul ooze here—he washes his hands at the kitchen sink and

I long to use that sink myself, to be in that kitchen. I write in the fog on the mirror.

The Great Spirit orders pizza. “Don’t forget to eat your favorite pizza, man.” Mrs. Cobb don’t eat anything with a face on it, but grinds the pie in the disposal’s teeth after the pizza serenades and bites the hand it feeds.

Films about houses are home movies.

Two goons face off, faces transformed by The Great Spirit / Satan. Goon one faces a fly; goon two a lizard. This portal to hell is a manhole cover. The goons shoot, burdened by their oversized heads. Only The Great Spirit knows what’s so important about the house. The Cobb family yard sale slows time: two little girls with a jump rope skip so slow the rope goes.

Larry’s wife asks, “Larry, what are you fooling around with that piece of junk for?”
To which he replies, “Piece of junk? This is just like the one my dad used to have.”
His wife is not convinced. “It’s really ugly.”
Impatience shades Larry’s face. “Look, I’ve got all these home movies and I think it would be great if I could get this running.” He asks Mrs. Cobb “How much is it?”
Mrs. Cobb has home movies too. “You don’t want that. It’s broken.”
Larry wants to buy it, if only to annoy his wife. “No, I’m real good with my hands. I can fix it.”
“It’s not for sale,” Mrs. Cobb says, clutching the old projector.
He growls. You promised to solve my toxic waste problem. He says, “Fine. Fine. Fine.” Larry and his wife head for their car, and for an exasperating argument, resolved over an adequate meal. Later, they will watch a movie on Betamax.

While Mrs. Cobb will watch herself and her husband watch their daughter walk projected on a white sheet that haunts her house.
Posted by Adam Golaski at 2:06 PM