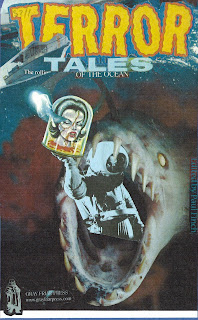 Last night my eldest declared that my contribution to Paul Finch’s Terror Tales of the Ocean is inscrutable. Something to do with lips? Of course she’s right. That said, “Hushed Will Be All Murmurs”—a title taken from chapter 25 of Charles Brockden Brown’s Wieland (“Let my last energies support me in the finishing of this task. Then will I lay down my head in the lap of death. Hushed will be all my murmurs in the sleep of the grave.”)—does have the virtue of being the shortest entry. Turns out, erotically-charged, decapitated heads are an ongoing concern of mine.

Terror Tales of the Ocean is the ninth in a series of anthologies from Grey Friar Press. All delightfully adorned with outrageous covers and sold in gift shops around England. In addition to my contribution, there’s Steve Duffy’s “Lie Still, Sleep Becalmed” (this is the second time I’ve been collected in an anthology with that story—the first was John Skipp’s massive zombie book)—it’s Duffy at his finest. Characters quickly and convincingly drawn and confronted by an utterly bizarre horror that creates a kind of lovely image. Of the stories new to the volume, I most enjoyed Conrad Williams' “The Offing,” a portrait of a teenaged girl on the cusp of adulthood in the midst of a ruined seaside landscape.

Slid between each story are little bits of weird nonfiction, all capped with alarm—of Megalodon, for instance, we’re told that, unlikely as it might be, “few will say for certain that this fabled ‘tyrannosaur of the ocean’ is not still down there, biding his time as he watches us from the inky darkness.” Oh, boy, kiddies!—to be watched by such a mindless god.
Posted by Adam Golaski at 11:19 AM