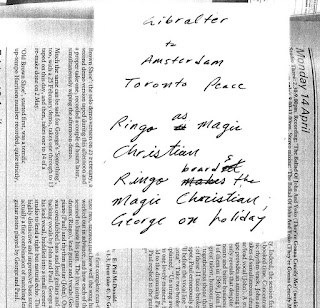 Ringo boards the Magic Christian; George “on holiday.” John returns to London with “The Ballad of John and Yoko,” calls on Paul at Paul’s and the two work it out: “John was in an impatient mood,” said Paul, “I was happy to help.” At Abbey Road (studio three, 2pm – 11, April 14, 1969), John sings lead, Paul sings harmony; John’s guitars (lead and acoustic), Paul’s rhythm and piano; eleven takes—“Take ten was the ‘best’ basic track."

Prince died yesterday. Yesterday, coincidentally, I stopped at Rhode Island Historical Cemetery no. 41—a plot surrounded by industrial debris—where’s buried Edwin L. Green, died April 21, 1946, alongside his wife, Marion, who died in 1911, and their unnamed, infant daughter (“our only child”). I like to think about John and Paul in the studio together, in the midst of no little legal acrimony, in the midst of John’s heroin use, days after John’s marriage to Yoko, a month after Paul’s to Linda, at work. At work and able to enjoy the pleasure they found in work and in working together.

“The Ballad of John and Yoko” single, b-side “Old Brown Shoe,” a neat pivot into the Abbey Road sessions, begun that day with “Something.”
Posted by Adam Golaski at 9:59 AM