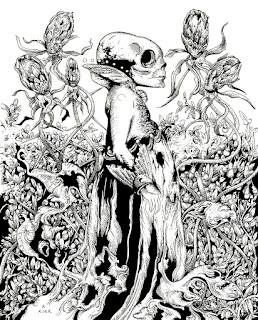 Caitlin R. Kiernan’s “Onion” is about two miserable young people who suffer glimpses of another world. Frank sees it through cracks in walls; Willa sees it in mirrors. They work shit jobs. Barely eat. Go to meetings in the basement of a synagogue where bitter coffee and day-old donuts are served. Willa accepts an invitation from a wealthy man who has an enormous glass tank full of seawater in his basement. Via that tank, some people can navigate to the world Willa only glimpses. Frank is jealous, feels betrayed, is a little bit really worried about Willa’s well-being. His rescue attempt is a bust: he finds Willa in the tank, hideously transformed and simultaneously convinced she’s in her mirror-world.
Only, that’s not how Kiernan’s “Onion” ends. Not this time. That’s how it ended when I first read it (collected in the chapbook Wrong Things, picked up for a couple bucks at a used book shop). When I read it today, I found no tank, no Willa-thing. Instead, Willa bums a cigarette and leaves Frank morose in Central Park.
To be clear, I didn’t misremember the story. The story changed.
[ Image: Richard A. Kirk's "Anguish of Mind" (2017); Kirk's art appears on the cover of the Subterranean Press edition of Wrong Things by Caitlin R. Kiernan & Poppy Z. Brite ]
Posted by Adam Golaski at 10:06 AM