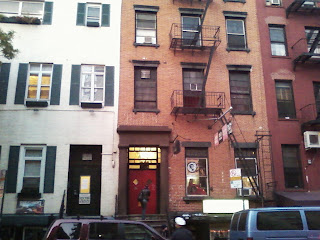 Last week, Wednesday, I drove to Manhattan for my reading in the Fantastic Fiction series. All along the Saw Mill Parkway were deer, their coats shaggy and dark. Once in the city, I lingered outside the KGB Bar (pictured above) as long as I could, stayed outside to watch the sky, as much sky as could be seen from the alleyways that make up the grid of that city.

KGB Bar is on the second floor of a three-story walkup; the bottom floor is a theater, upstairs I don’t know what. A rehearsal space? I’m pretty sure people were auditioning for a show. There was a woman on the second floor landing, a glistening gash above her eye, she was weeping, a script rolled tightly in her hand. She was called—I stepped aside and she rushed past me, up the narrow stairs. At the top of the stairs stood a man waiting for her, a sack in his left hand. Everything’s always weird in Manhattan.

The bar was red. High-ceilinged. Decorated with Agitprop and bears. Since I was reading, I was treated by Matthew Kressel and Ellen Datlow to a Baltika porter I very much enjoyed. Jenna Lawrence was there, a comfort—I wanted to ask, Are they auditioning for Grand Guignol?—but the opportunity never presented itself. I was introduced to the main act, Paul Witcover and friend Cynthia Babak. The audience gathered and soon enough it was time for me to read.

After Paul read, I stepped out of the bar to make a call. Before I could dial, the woman with the head wound stumbled down the stairs. I asked, What’s going on up there? She stopped in front of me, stared at me, then forced that rolled-up script into my hand. I gestured, like, I don’t want this, but she just shook her head and took off down the stairs. Jenna appeared at my side and told me we were going, Matthew and Ellen were taking me and Paul out for dinner. Very nice, I shoved the script into my bag and forgot about it, Rick Bowes distracted me and Jenna with stories about NYC architectural peculiarities.

Once home, exhausted from a dark drive, I dumped the bag in a closet and forgot about it.

Until tonight. Of course I have other things to do. I’ve got to read a few essays concerning Kit Marlowe, “poor deceased Kit Marlowe,” and knock out a few pages of a story I’m writing for editor Danel Olson. I don’t have the time to read the script tonight. Tomorrow.
Posted by Adam Golaski at 10:30 PM