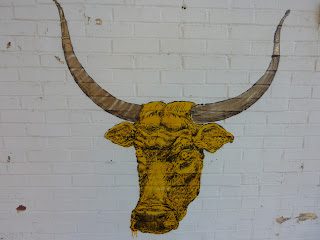 At a party in Iowa City hosted by Erika Jo Brown, I tripped over a pair of glittery red and gold trimmed cowgirl boots. I crouched down to right them but ended up staring at ‘em for more than a few minutes—till Joshua Unikel took me aside to talk poetics.

I didn’t think about the boots again till I lay down for a three hour nap before John and I needed to leave for Northfield. Those boots shone above me in the dark hotel room, a pair of Mars lights.

Many to thank for Iowa City. Especially poets Rob Schlegel, Keisha Lewellyn Schlegel, Joshua Unikel, and Matthew Klane. A good crowd attended the reading at Prairie Lights. I was thrilled to meet Cole Swenson, whose books I’ve been reading since I came upon Park at Talking Leaves in Buffalo, about a decade ago.

The next morning John and I read and spoke at St. Olaf College, a visit arranged by Kaethe Schwehn, who then brought several of her colleagues to our Magers & Quinn reading in Minneapolis. There, we read with Alan DeNiro, who whispered to me a very odd anecdote just before I got up to read, something he’d read in the paper, about a girl whose bones were crystallizing. I said, “Don’t you mean her organs?” He looked at me funny and I wondered if he’d said anything to me at all.

We enjoyed Milwaukee for its local kindness: “Stef” the roller derby announcer, Avital from Brazil, and Jo at Buckley’s on Cass. We read there too. At Boswell’s. Not only a bookstore, but a museum of tin Band-Aid boxes and abandoned card catalogs. I flipped through and found the card for The Nets of Space by Emil Petaja. I didn’t dream that book!

Last Wednesday I returned to UConn to give a reading at the Co-op. Thanks to Kim for her reportage and to Ms. Staubach for hosting me. Eliza Smith, beloved New Genre intern and Shakespearean scholar attended, as did Katelyn W., to whom I gave a copy of Werewolves and Shapeshifters, and Emily W.—she and I talked Spenser and though Ben Johnson wrote that “Spenser has no writ,” we’re inclined to agree with Coleridge who admired the “indescribable sweetness and fluent projection of his verse….”

Sunday found me in Providence, R.I., where I happily spent a couple hours on Wickenden Street, in a waterfront park, and on a block of cement in a parking lot. The sun set, just behind a factory (three smoke stacks); behind me, when the clouds—gray, pink (purple, white)—broke, the moon. Not full. I’d’ve stared longer at the sky, watched the whole of its transition from day to night, but I was due at Abe’s Bar for the Cousins Reading Series, hosted by William Walsh and Darcie Dennigan.

Darcie, who just happened to be Kim’s teacher (at UConn) introduced me lovely with a few kind words. I read with John, who entertained us all with the lighting and an excellent reading, and with Matt Bell and Carol Novak. Better than the incredible sky was the company of two old friends, Jeremy Withers, who gave me a copy of his solo album (more on that later) and Elizabeth Dooher, now a sculptor in New Bedford. Both have saved my life many times; their presence, revitalizing.

As I drove home on very dark and narrow roads, I caught the glimmer of a deer’s eye in my headlights and slowed to a stop. The deer crossed the road—paused to gaze at the car—and then into the forest.