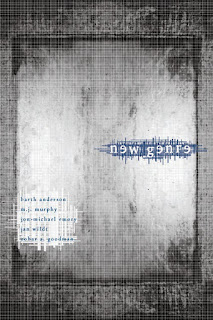 Two days ago I emailed Matthew Pendleton to accept his story “Work Planet Welt Space” for New Genre 7. His story “I Am Antenna / Antennae” appeared in issue 6. Both stories depict a barely conscious humanity, surrounded by a massive system, possibly of their own making, but now utterly beyond their understanding. Yet, the worlds portrayed are not wholly dystopian, but are worlds populated with nice people who like each other, and filled with moments of childish delights. As far as I know, the only other story Pendleton has published appeared in Birkensnake #2, and can be read here. His blog is also a fine introduction to his entrancing obfuscation.

Also in New Genre 7, a little ghost story by John Cotter, who mainly operates in realism, but has delved brilliantly into weird fiction before, see “Christobel” in The Lifted Brow no. 4; science fiction from poet Greg Purcell; a post-apocalyptic sequence from Geordie Williams Flantz, whose story “The Ghost Days of Melody Brown” appeared in Shadows & Tall Trees no. 2; and a trip to an underworld by Jennifer Claus, whose story "The Room Is Fire" will be her first published work.

The image above was one of a brilliant batch of possible covers for New Genre 4, designed by the visual artist, composer, and bass guitarist Jeremy Withers.
Posted by Adam Golaski at 1:41 AM