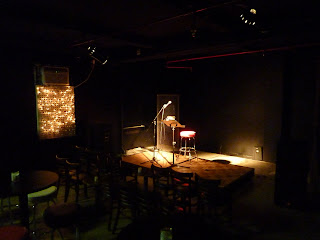 Above, the reading space at Bar 82. Host Greg Purcell (pictured below) announced that this was his final night hosting the St. Mark’s Reading Series; in a week, he runs out of furniture in New York City. 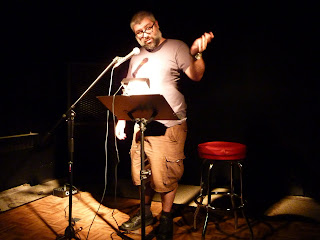 I read an unpublished story (“Holy Ghost”). Kira Henehan followed with an excerpt from Orion You Came and You Took All My Marbles; there’s music in that prose. 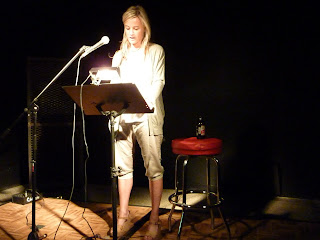 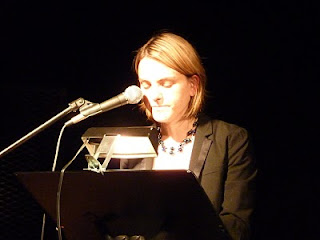 The audience was excellent—a modest turnout that filled up the room nicely, including the appearance of good friend Jenna Lawrence. Later, there were noodles. Even later I returned to my hotel room. No dreams there, by the way. An odd moment on the way home, though:

I left Manhattan by train. I read Chambers’ “Yellow Sign.” An hour out of the city I noticed, seated across the aisle and two seats ahead of me, a young woman who looked exactly like a student of mine who was killed shortly after her graduation (she was struck by a motorcycle).

The air on the train was too cold—the young woman stood to get a hoodie to wear over her dress. Embroidered in white on the front of her black dress was a familiar pattern—why familiar I couldn’t say until all at once what at first appeared to be only a symmetrical design coalesced into the face of a horse. We entered a tunnel, and the red light from an exit sign made a long line from the horse’s forehead to the young woman’s throat.

We left the tunnel, the young woman pulled on her hoodie, and sat down. For the rest of the trip I stared out the window.
Posted by Adam Golaski at 12:27 AM