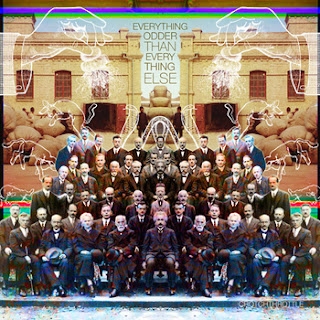 A second mysterious epistle from the Crotchthrottle. The Wyrre Jimes has me on his list, has had since that night on Wickenden Street.

After dinner with Elizabeth D., en route to my car, I was hailed by a man dressed in a suit like a costume from a Victorian period-film. Wisdom nearly kept me from stopping, but my instinct was for trust; I followed him onto a side street. He gave me a cup—I lifted the lid—coffee. “For the road,” he said. His voice was muted—typical for a bass player. “Why not have a listen,” he said. He slipped a CD into my jacket pocket, shook my hand—those fingers! strong as an ape’s—also typical for a bass player. That was two years ago, the Crotchthrottle’s first record: Slap-fight at the Coffee Shop. A joke title. The music was more complex. Ominous drones, driving drum beats, little melodies that meander and double.

Today, their latest record, Everything Odder Than Everything Else. The album art is remarkable. A group shot of famous men seated across an invisible chasm. Where the chasm warps the light, the camera revealed their true faces. Their faces like the strange faces of the Croththrottle: Heimeier Axia, Jimes, Lysander Foley, and Atom McPhee. The only face that appeared as it did in our world is Albert Einstein’s. That’s no surprise.

Their music, again, is mostly instrumental, though Axia’s voice appears on “King of the Space Elephants,” “Except Ants,” submerged on the excellent “Intersecting Lines,” and on “Cabinet.” He’s getting bolder. Everybody knows about the space elephants, but not everybody knows about the lines. The chasm. While the music on the new record resembles that of the first, it’s a lot more open. The tracks meander less. McPhee’s drums are more subtle. The bass and the effects lead and the ominous drones are given more space. This progress the result, I can only assume, of their deepening interaction with the Jellyfish.

Generally, I try not to know too much about the Jellyfish and the chasm—I know they operate hand-in-hand and push consciousness and such-and-such. The Crotchthrottle’s music is about as deep into that head-space as I’m comfortable with. For you? Everything Odder… may be just the passage you were trying to open with Robitussin and non-Euclidian geometry. I say bypass all that. Get a magnifying glass and a set of headphones. Listen to Everything Odder… and search the album art for secret compass points.

Okay. Accepting street-coffee from Jimes was a bit more than just listening to their music. I'm a hypocrite. Forgive me. But my instinct was good. The coffee was kind. That night two years ago, the dark route from Providence to Hartford shone.
Posted by Adam Golaski at 9:13 PM