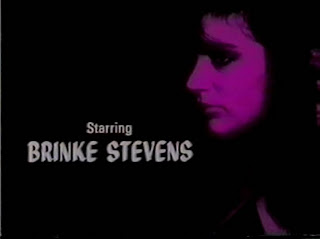 The following is an excerpt from the column Video Lies, a regular feature in the 1990s ‘zine Kraken Farmer, edited by the redoubtable Lucy Kurtz, available at Tower Records and Flyrabbit.

Abstract.
Diane buys a mansion from a realtor deformed by hypohidrotic ectodermal dysplasia. During the night she writhes in silk as the mansion’s demon possesses her with the spirit of an evil baron. Diane wanders the house in fetish gear and mounts a priest. Handel’s largo from Serse plays as Diane bloodies the priest’s chest with claws given her by the demon. The scene fades to black; “Intermission” appears on the screen; Serse plays to its conclusion. Fade to star and author of Teenage Exorcist Brinke Stevens who whispers, “Brink, break, ache, lake, shore, thresh, hold, hold would, mark, mar, ocean, lore, fore, ground, down, own—”  her voice and the image fade.

To exorcize Diane, the delivery boy refers to the comic book he carries rolled in his back pocket, which turns out to be quite helpful. “Pow!” he shouts. “Wham!” and, finally, “Pfft.” The baron slips away. The horse eats the demon and the demon doesn’t even care.  Our attention shifts to the open window. It’s night. We stare out the window until dawn. That’s twenty minutes of the film’s 86 minute running time. The mansion is empty. Diane is herself again. She strips ‘till she’s Brinke Stevens.
Posted by Adam Golaski at 12:13 AM