205. The bleeding of one category } into another. 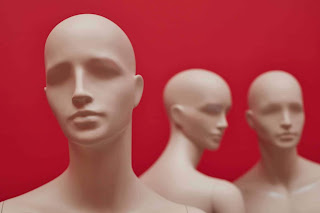 The narrator of Throat Sprockets (Tim Lucas, 1994), sees The Cure at Dulles airport: “I watched with fascination as this troupe of fern-haired, powder-faced specters trudged with their entourage through the crowd toward a private exit.” Shortly thereafter, he considers the Billboard Top 100:

Nearly all the nation’s hit songs, I noticed, had been recorded by mannish women and ambivalent men, with mournful lyrics tenderly addressed to the genderless lovers no longer in their lives. I recognized the symptom. All of us—the people who shaped society—were somehow touched by the same depression, and our blue funk was profiting no one but the business we represented in order to stay alive and in this pathetic state. To the record companies who recorded these balladeers, their sorrow was a platinum payoff, a jackpot of skulls crowned that particular week (the chart said) by Sinead O’Connor’s interpretation of “Nothing Compares 2 U.” This, I told myself, was the first generation of compact disks: silver stacks minted to perform repeatedly, to spin eternally without distortion or diminishment; the voices encoded on them—the first sounds chosen for such preservation—shared a ubiquitous sadness that seemed to yearn for the gone days of vinyl, their voices plaintively aching to be abused once again with yesterday’s needles.

This passage caught my attention in a way it wouldn’t have when I first read the novel in 1994. Then, it served only as a metaphor: compact disk as vampiric, ever-living undead. Lucas’ idea that a historic event—the advent of the compact disk—would be associated with the malaise of a certain group of artists forever, didn’t make an impression.

Fall, 2013, I spent an afternoon with music writer Geeta Dayal—I’d invited her to speak to my students about her Another Green World monograph. I picked her up in Cambridge, drove her to Providence, brought her to both my classes, and took her to lunch. She was a memorable speaker. Between classes, she regarded the CDs in my office (I’m right now listening on an inexpensive Sony boombox to a CD pressed in 1993). She preferred vinyl, she said—she said she always thought “CDs are ugly.” I was surprised. Sure, I was aware of the rhapsodizing vinyl inspires (especially its sleeve), but the beauty of an LP does not ipso-facto suggest that compact disks are ugly. I told her I disagreed, that I love the oil-slick rainbow of an unadorned CD, the different iterations of the jewel case, iterations of the booklet, other varieties of packaging (including mini-reproductions of the vinyl sleeve); I have CDs that are black on both sides, a CD that changes color when played, a CD shaped like Paul McCartney’s head, gold CDs, a short-playing CD set in a transparent ring, double-sided CDs, and CDs that look like little LPs. I doubt I swayed Ms. Dayal. And I will forever be envious of the stack of Kompact LPs she told me she obtained for free.

I don’t like the phrase “mannish women and ambivalent men.” If “mannish women” is shorthand for lesbian, it’s pretty weak shorthand; if it’s shorthand for women who are tough, or muscular, or for women with short hair (or none), etc., it’s weak. Sinead O’Connor is not mannish, she’s Sinead O’Connor. And what does “ambivalent men” mean in this context? Bisexual? Asexual? Gay? Or just guys who don’t care?

Throat Sprockets is kinda queer, but it’s also very hetero. Once the narrator sees a film that objectifies throats his sexuality is radically changed. He loses all interest in what once aroused him (he was a “breast man”). But he’s only attracted to heterosexual women’s throats, and the women who are also into throats are invariably subservient.

The kinda queerness of Throat Sprockets is its virtue. At the start of the novel, the narrator goes to the Eros during his lunch break to watch pornographic films, even though “X movies, Triple X, whatever you want to call them—have never particularly aroused me.” Instead, he goes

because of my disenchantment with mainstream films; [he] was fed up and growing weak on a steady diet of movies made by money and interested in only attracting more money. American films had become an art form with the agent as auteur; their lack of serious adult concerns was enforced by an outmoded and unrealistic ratings system that refused free expression to works of original or unpopular thought. … Adult films also had a peculiar knack for capturing the listlessness I found at the core of my real life, better than so-called “legitimate” films.

An ambivalent man.
Posted by Adam Golaski at 8:40 AM