3. Readercon } Through which the fearful lovers are to whisper 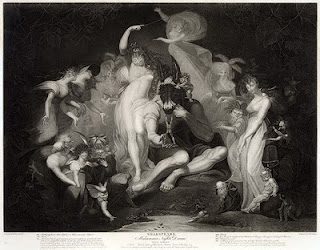 Readercon has long been important to New Genre. Editor David Hartwell made space for issue #1 on his table in the Readercon bookshop in 2000; most years since, we’ve had our own table. New Genre has never kept a publication schedule (opting instead to wait for not just good but brilliant fiction, drawn exclusively from so-called slush), but when a new issue does manifest, Readercon is where the journal has its debut.

This year, the New Genre table will present two new titles: Jennifer Karmin’s Aaaaaaaaaaalice and the Open Letters Monthly anthology. Of course, issues of New Genre will be available, including #6, where the Stephen Graham Jones story “Lonegan’s Luck” first appeared.

On Friday, between noon and 3, I’ll be a participant in a recitation of A Midsummer Night’s Dream. Roles have yet to be determined, but I’m angling for the part of the wall that stands between Pyramus and Thisbe, as then I’ll be smooch’d on two sides. At 5, I’ll read the Theodore Sturgeon story “The Other Celia,” part of a two-day celebration of Sturgeon’s short fiction.

Saturday afternoon, I’ll question the wisdom of publishing an essay on The Millions, as moderator of a panel called “The Fiction of the Unpleasant,” inspired by an article Peter Straub wrote. Straub will join me, along with Kit Reed, Kathryn Cramer, Mike Allen and Barry N. Malzberg. No, none very esteemed, but nonetheless. At 6:30, during the dinner break, I’ll offer a reading. What I read depends on how antagonistic I feel.

I’ll spend Sunday investigating the apartment directly beneath my own, where I’m certain there’s living a young woman whose skin is paper.
Posted by Adam Golaski at 1:34 AM