5. Worse Than Myself } The Man from the Peak 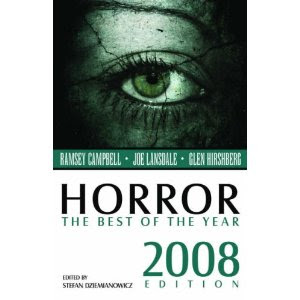 This is old news.

“The Man from the Peak,” a story original to the Montana half of Worse Than Myself, was singled out by Ellen Datlow for reprint in her Best Horror of the Year (vol. 1). Often stories that appear in best-of anthologies appeared first in hard-to-find, little-known journals or in similarly obscure small press anthologies and collections (as did mine); a best-of can grant these stories a second life in front of a larger readership. That’s why they’re important. They’re better, too, than end-of-the-year lists or industry awards, because there you have it, the thing itself, the story: now you may read it and decide for yourself whether or not to look up an author, a magazine, a press, etc.

(For a brief while it looked as if horror would have an unprecedented wealth of best-ofs, but most never appeared and a couple vanished after only a volume or two; for example, and of interest to me, Horror: The Best of the Year from Prime Books. Volumes for 2007 and 2008 were edited but never appeared. I know about the 2008 edition because Stefan R. Dziemianowicz, its editor, selected “What Water Reveals” (also from Worse Than Myself) to be included.)

Best Horror of the Year (vol. 1) received a good amount of attention because it’s the first in a series more likely than most to last and because it’s pretty good. Reviewers liked it. In as many reviews as not, my story wasn’t mentioned, but in two reviews, my story was singled out. Orrin Grey, for The Innsmouth Free Press, wrote that “‘The Man from the Peak’ might be my favourite story in the book” and Michael Lambe, on his blog, wrote: “…my favorite in the collection is Adam Golaski’s ‘The Man from the Peak’…. It lulls you in, then gradually, dreamily and subtly, creeps you out, and finally brings you face-to-face with pure, unadulterated, bloody HORROR…. That one story alone is worth buying the collection for.”

Perversely, the review of the anthology I enjoy the most is a negative Amazon.com customer review by Vicky Stow. She found it disappointing. She did like one story (“Beach Head” by Daniel LeMoal), and she admits to giving up without reading the last two stories—which are, by the way, “The Man from the Peak” and “The Narrows” (by Simon Bestwick). I ache for Ms. Stow to weigh in on my tale!

(Bestwick’s story is among the finest in the book. LeMoal’s is excellent and unique. “Loup-garou,” by R.B. Russell, does something so fine it must be the best of the bunch. I would be proud to have written any of the three; Russell’s I don’t think I could have.)
Posted by Adam Golaski at 9:58 PM

Email ThisBlogThis!Share to TwitterShare to FacebookShare to Pinterest
Labels: Worse Than Myself