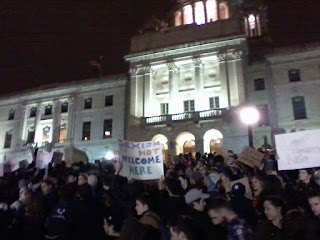 5:50am, at the bus stop, txt from Zet: “So I’ve been crying off and on all night. I don’t know how to tell the girls that trump won without scaring them. Because I am scared. I’m sad. What should I say?”
8:30am, to my class: I don’t usually discuss my politics with students, but I am horrified by the result of the election. I assume many of you are exhausted and may be worried, too. We must not succumb to anxiety, but figure out what’s next. I can point to a value we all share: education. We need people to be educated. Not told what is true, but educated so as to be able to read the world. For that, we need context: that’s why we study—not to accept what we’re told without question, but so we can question all with intelligence.
[I then attempted to transition into a discussion about the assigned reading—Hua Hsu’s essay “White Plight?” (published as “Pale Fire”). Assigned in August, but entirely relevant—Hsu writes, “as whiteness becomes a badge of dispossession, earned or not, it’s likely that future elections will only grow more hostile, each one a referendum on our constantly shifting triangulations of identity and power.” The essay is flawed—Hsu makes generalizations, is patronizing—but he identifies ideas he’s come across that I value. For instance, he summarizes a point Carol Anderson makes about “…our tendency to characterize moments of racial crisis as expressions of solely black anger…. The issue… was not just ‘black rage’… [but] the direct consequence of ‘white rage’”—which I usually hear characterized as, simply, anger.]
2:37pm, a txt to my sister: “Doing ok? I found myself weeping in my office & barely got through class—I kept choking up & one of my students burst into tears. I feel better now, but fucked up.”
[I went home early. Spent the afternoon with my family. When my eldest went out with Zet, I made a huge pile of leaves for my youngest to jump into and dealt with her scraped knee and blew bubbles for her to chase. I told my daughters that, whenever I am upset, I remind myself that I get to go home to them, and what a comfort that is.]

7:20pm, at Trump protest. I stood on the steps on the capitol in downtown Providence and listened to a man with a megaphone. Sent txt to myself: “Men doing the shouting. A woman speaking is drowned out by the crowd & corrected by male leader.” As I walked down the steps a drone buzzed above the crowd. The man with the megaphone shouted that I must reject my whiteness. A white teenager nodded his head enthusiastically. I stood beside a young woman and said I was frustrated that the men's voices drowned out the women's. She said, “That’s society.” Channel 10 news had a camera just behind me; I wanted to be seen there. I asked the woman if she was a student. She said no, she worked as a “corporate adviser.” She was an elementary school teacher, but was dismayed by the corruption she saw first hand. She introduced me to a student with a retainer and a Yarmulke. A man to my left introduced himself—another professor. A professor of music. I was recognized by a woman who taught my daughter art at the RISD Museum. I overheard a woman say she has “a pussy with teeth.” Another woman explained to a girl that pussy wasn't profanity. Some people came to shout at us, that we knew nothing, but quickly lost interest. A band began a woeful tune—I'm pretty sure the same band that led the Halloween parade through my neighborhood. I turned to the music professor: "Would you call that a dirge?" He laughed, said, "It sounds like the blues to me." And then he caught it—"It's 'When the Saints,' but messed up."

8pm, at Granoff Center for “Come Shining: In Tribute to C.D. Wright.” Someone—a student, I presume—led me to a chair. The man to my left asked if I was a professor. I confirmed, and then recognized him. “Our paths have crossed before,” I said. Peter Gizzi. “I saw you interview Clark Coolidge at Flying Saucer.” We talked until the tribute began. Forrest Gander, C.D.’s husband, sat a row ahead of me, beside his son. We listened to a recording of C.D. read. To tributes and regrets. I mourned.
Posted by Adam Golaski at 8:54 AM