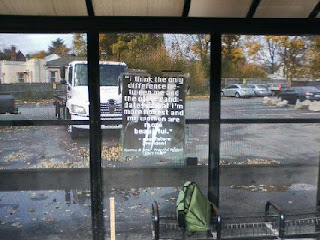 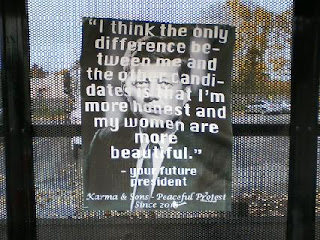 I don’t like to be the choir, sung to by entertainers. I can’t listen to post-election, political commentary by comics. Trevor Noah, John Oliver, et al—toothless, broadcasting in an echo-chamber.

Taught “Kin & Kind” by Jonah Lehrer (“self-plagiarizer”); it’s about E. O. Wilson’s recent (2012) reconsideration of “inclusive fitness.” When Wilson declared he was wrong about inclusive fitness—that it was too simple an explanation for altruism, he “set off a scientific furor.” Protest, that is: “denunciations in the press and signed group letters in prestigious journals; some have hinted that Wilson, who is eighty-two, should retire.” When Wilson argued in support of inclusive fitness, in 1975, he “sparked a bitter controversy.” Protest: “Wilson was attacked by eminent scientists…. There was a group letter in The New York Review of Books.”

A map of protests appeared in The New York Times. “Thousands of people have turned out to protest….” Thousands? The map does not inspire.

I’ve noticed something else in the Times, and maybe it just stands out because it seems so weird: photos of protests show lots of white people; photos of Trump supporters are of black Trump supporters. See the photo essay, “Scenes From Five Days of Anti-Trump Protests Across a Divided Nation”; the last photo shows a young, black, Trump supporter arguing with a young, white, protester. See the photo accompanying the Times article “Many in Milwaukee Neighborhood Didn’t Vote — and Don’t Regret It” (Nov. 20): a barber shop, where “Four barbers and a firefighter were pondering their future under a Trump presidency at the Upper Cutz barbershop last week.” All in the barbershop are African-American. The photo caption reads, “Justin Babar, seated at center, said he voted for Donald J. Trump as a protest against Hillary Clinton.” Are these photos deliberate commentary, meant to complicate the idea that Trump was elected by uneducated whites?