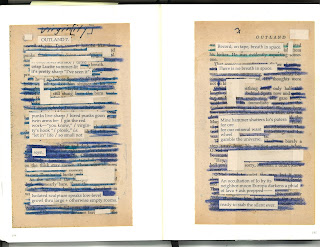 Penultimate, a pair of drawings by Colleen Maynard—graphite and charcoal; presumably close-ups, as in her Fossil Collection series. The way getting close can make an object hard to see. No, hard to know. The universe, as seen from Earth.
Posted by Adam Golaski at 1:30 PM