2. Some Notes for an Essay } Nina's Dance 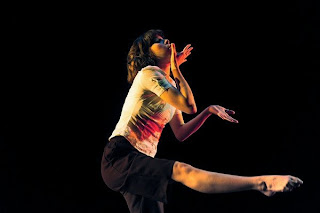 Above, Nina Joly, a former student of mine and a dancer/choreographer.
Notes in response to “Twins,” a dance choreographed by Nina to Calvin Harris’ song “I’m Not Alone.” Harris seems like a fool, but the song is strong; it’s not his anymore anyway. Nina dances w/ Lyz Hazelton.
I’ve no dance vocabulary. Nina reassures: “…most of that stuff doesn't have names anyway.”
[0:15 – 0:22] Early on, when Nina and Lyz turn their backs to us, they put their hands to their thighs/rears (the “rear grab,” as Nina permits me to call it), then move side-to-side for a few steps. They're lifting themselves up, while also doing something that might be crass. 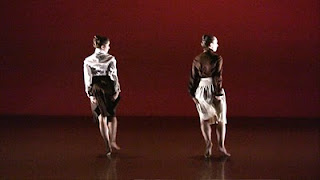 [1:33 – 1: 47] Nina and Lyz here mostly move with their arms, but their hips move too—they keep their feet planted—the movements that aren’t made by their arms appear directly linked to their arms. (This is a moment when I “stood up” and thot, “Oh yeah, that's excellent.”) (Original note: “Yeah! It's the first chorus. That arm stuff! Yeah. Oh, I see. It's NOT just arm movement. You two are moving your whole bodies. That's what makes the arm motions so vivid.”) 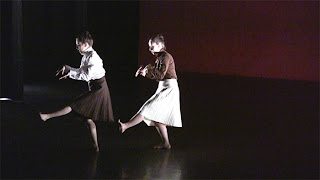 [2:30 – 2:50] The strength of small gestures/movements, contrasted with a single bigger gesture (an upsweep of the arm). Often in the choruses.
Embracing, pulling apart. Steps taken together/mirrored, separate motions (“mirrored body movements—that are especially good to watch. two bodies/light waving” [1:50]. ) Nina is the leader but Lyz catches up, creates her own space with movement, and is the aggressor (in the end, she drags Nina from the stage).
The costumes are brilliant. Simple color contrast, dark and light but not black and white (so not obviously binary). The prim tops (pleated and buttoned up to the chin) and skirts (pleated, hem below the knees) allow certain moves to happen without becoming crass (the aforementioned "rear grab") or racy (both Nina [1:59] and Lyz [2:43] shake their shoulders vigorously; in the wrong costume, the only thing I'd see are breasts moving, but because of the costumes, I can see everything that's happening. By covering up, I see more than the dancers). (Nina re. my costume comments, “I’m also really pleased you like the costumes. I had always planned on doing something old-fashioned-ish, but I'm sure you understand how after you think about your own ideas for months and months, you can no longer gauge how things will be perceived. I'm so glad it was a successful choice.” I know what is meant by “old-fashioned-ish”—the costumes are not really old-fashioned at all.)
(Watch the video; a combination of two performances, shot and edited by Dave Joly.) 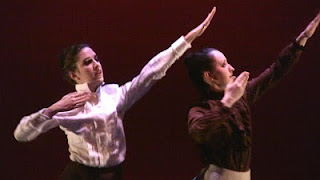 “I found that the men most in repute were all but the most foolish; and that others less esteemed were really wiser and better. I will tell you the tale of my wanderings and of the ‘Herculean’ labors, as I may call them, which I endured only to find at last the oracle irrefutable. After the politicians, I went to the poets; tragic, dithyrambic, and all sorts. And there, I said to myself, you will be instantly detected; now you will find out that you are more ignorant than they are. Accordingly, I took them some of the most elaborate passages in their own writings, and asked what was the meaning of them—thinking that they would teach me something. Will you believe me? I am almost ashamed to confess the truth, but I must say there is hardly a person present who would not have talked better about their poetry than they did themselves. Then I knew that not by wisdom do poets write poetry, but by a sort of genius and inspiration; they are like diviners and soothsayers who also say many fine things, but do not understand the meaning of them. The poets appeared to me to be much in the same case; and I further observed that upon the strength of their poetry they believed themselves to be the wisest of men in other things in which they were not wise. So I departed, conceiving myself to be superior to them for the same reason I was superior to the politicians.”

from "Apology" by Plato, translated by Benjamin Jowett.
Posted by Adam Golaski at 8:01 PM No comments: