Sainte-Suzanne, the nun of Denis Diderot’s La Religieuse, while meditating in her cell “about the strangeness of women’s mentality” determines such strangeness is due to  “the effect of segregation” and concludes,

Man is born for life in society; separate him, isolate him, and his ideas will go to pieces, his character will go sour, and hundred ridiculous affections will spring up in his heart, extravagant notions will take root in his mind like tares in the wilderness. … It may well be that greater strength of character is needed for standing up to solitude than to poverty, for if poverty degrades us segregation depraves (136).

Additionally, she claims that “The urge to hurt and torment gradually wanes in the world outside; it never dies in the cloister” (59).

This morning I did wish I could go to a coffee shop to write, but it’s not the company I want. I plan to go outside shortly, windy and cold as it is, and write there. That ought to do the trick.

…a little dark underground cell and threw me onto some matting half rotten with damp. There I found a piece of black bread and a pitcher of water, with a few other necessary vessels of the coarsest kind. For a pillow you had to roll up one end of the mat, and one a stone block was a skull with a wooden crucifix. My first instinct was to put an end to myself; I tried to throttle myself, I tore my clothes with my teeth, uttering fearful cries and howling like a wild animal. I banged my head against the wall until it was covered with blood. In fact, I went on trying to kill myself for three days; I thought it was going to be for the whole of my life (65).

(Though certainly not Diderot’s intent, I read Saint-Suzanne’s narrative at the second cloister, where she is loved by Madame ***, as a caution against celibacy and a caution against the condemnation of homosexuality.)

Leonard Tancock, translator of La Religieuse, confuses me when he writes, “A recent French film of the novel… ended by showing Sainte-Suzanne, lured into the brothel, break way from a man’s lewd embrace….” I would not be confused if he wrote, “lured into a brothel”—then I would know the brothel scene was entirely the filmmaker’s invention. But the brothel—I’ve reread the ending several times and there is no brothel.

Tancock also writes, that, “After years of convent life she is unsuited for anything, a lost, helpless soul with no knowledge, no skill except for some music, no initiative, no future.” I’m not sure this is true, either. Sainte-Suzanne writes, in her application to be a maid,

In my father’s home I learned how to work, and in the convent to obey. … I can sew, spin, embroider and launder, and when I was still in the world I mended my own lace…. I am not clumsy at anything and nothing is beneath me. I have a voice and am musical, and I can play well enough to entertain any mother who would like me to, and I could even give lessons to her children, but I should be afraid of betraying my identity by these signs of a superior education. If I had to learn hair-dressing I would quite like that, and I would take some lessons and soon master this little skill (188).

That she is asking for a job shows she has initiative, and within that request she shows an interest in learning new skills—more initiative. Does she have no future? She has knowledge. Unless she has exaggerated throughout her narrative (that would be uncharacteristic of her), her singing voice is extraordinary; furthermore, she can play harpsichord—more than "some music."

Maybe she has no future. Diderot does not decide her fate. Her benefactor is dead, but she has a job. Does she have no future? We suspect that she does not.

[Quotes from Penguin Classics 1974 edition of The Nun, translated by Leonard Tancock. Above image from La Religieuse, directed by Jacques Rivette ,1971.]
Posted by Adam Golaski at 11:38 AM No comments: 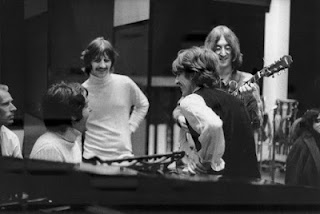 Mark Lewishon writes “…a number of [Abbey Road’s] songs were well under way by that time. One was ‘I Want You,’ a fine John Lennon song…” A “fine” John Lennon song? And, “…begun now with 35 takes of the basic track and John’s guide vocal (one experimental take was sung by Paul McCartney)…” Is there a McCartney vocal bootleg somewhere? [from The Beatles Recording Sessions, Harmony Books, 1988.] Kevin Howlett writes, “…in a session produced by George Martin, ‘I Want You (She’s So Heavy)’ was recorded from eight o’clock on a Saturday evening through to five on Sunday morning at Trident Studios….” And, “During that night in Soho, there were 35 takes (many of them breakdowns) recorded on three reels of eight-track tape.” [from Abbey Road Anniversary Edition, Apple Corps Limited, 2019.]

Consider the nature of “I Want You (She’s So Heavy)”: lyrically simple / repetitive and musically repetitive (you might object to repetitive; the music changes quite a lot); what would it be like to work on 35 basic rhythm tracks?

When the session was over, did McCartney, the only Beatle still living in London, step out into the brisk air—it was in the mid-30s but with clear skies in London on February 23, 1969—and contemplate a walk back to Cavendish Avenue? It’d be a long walk—52 minutes. Too bad, he might’ve thought, we weren’t at Abbey Road, just a 10-minute walk from his place.

Coming out into the city so early on a Sunday morning, high from a productive session of artistic collaboration with friends—McCartney surely looked up at the sky, smelled the air, wondered if he ought to go straight to bed, or locate a bakery, or if he could find some way to ride the high a little longer—why not walk toward St. John’s Wood?

Posted to YouTube in 2011 by Astrid Shapiro is “Paul’s house” a 1:42 video that shows “my best friend” (in purple, with a slightly downcast expression) outside the gates at 7 Cavendish Avenue, where McCartney lived in ’69 (and he still owns the house). Their timing is good. The gate is opened for a messenger by someone who works for McCartney, and he’s very friendly. As they’re talking, the front door opens, and another employee steps out, and Astrid and her pal are simply beside themselves.

And, you can walk with “American drummer Marty Richards” from 7 Cavendish to Abbey Road Studios (posted to YouTube by ursulageorge in 2010). A familiar walk.
Posted by Adam Golaski at 2:28 PM No comments: