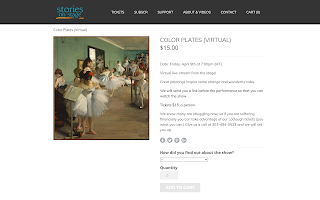 Color Plates began with a used copy of Sam Hunter’s Toulouse-Lautrec—to be cut-up, I thought, for poetry; instead, Hunter’s book inspired a short ekphrastic exercise.

Gradually, Mary Cassatt became central to Color Plates. A woman who did not allow other people’s expectations to interfere with what she wanted to do. All the painters whose work the Plates refer were involved with the Impressionists, but also worked outside Impressionism.
It took me a few years to draft the version of Color Plates I sent to publishers, & when a press accepted that draft, I continued to edit & cut. Some cuts were hard won: a story about a pianist who gives birth to a heron shortly before a concert was beloved by the publishers, but I feel what was attractive about that story was all flash. At the time, I couldn’t get it right. Other rejects were too convoluted—they weren’t true Plates.
Color Plates is out of print. A natural course for a book to take. Copies can be found on secondary markets—I see a copy at The Strand, for instance. Maybe another publisher will reprint it, perhaps with reproductions of the art that inspired the stories? (This was the wish I heard most often from readers—they wanted to look at the paintings while they read. Of course!) If Color Plates is picked up again, I'll write a few new stories for it.
In the meantime, Stories on Stage will present a selection from Color Plates read by actors. The folks in charge, Abbe & Anthony, are generous & thoughtful people—it's very satisfying to work with them. As each Plate is read, the artwork will be shown. After the show, the performers answer audience questions; I’ve been invited to join. I don’t know all the details, but the show will be streamed on a platform heartier than Zoom.
I'd also like to thank Isabelle Clark, this Color Plates' patron. She's wonderful.
Originally meant to be performed on stage in Denver, this virtual performance can be attended by anyone anywhere, which is great.
Stories on Stage has been around for twenty years. They’ve done a couple virtual performances since the pandemic postponed their 2020 season, too. The details for the show are here.
Posted by Adam Golaski at 11:56 AM No comments: 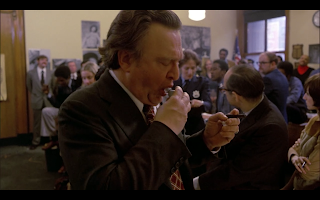 Investigating why ex-Zep guitarist Jimmy Page covered a Chopin Prelude (“No. 4 in E minor”) during the 1983 ARMS Charity Concert series (raising funds for Multiple Sclerosis research) led me to Death Wish II (1982)—Page, hired to write the soundtrack, lifted No. 4 & incorporated it into the soundtrack. He called this composition “Prelude.” It’s on the b-side of the soundtrack LP. At the ARMS shows, he performed three tracks from Death Wish II—I guess it was the only new music he had to offer? (I like some of the synth-heavy instrumental stuff. “The Chase,” “Hotel Rats & Photostats,” “A Shadow in the City,” & “Untitled Bow Creation”—all of which could be happily inserted into a horror movie. The rest of the Death Wish II soundtrack? This is no lost gem.)
While looking at Death Wish II, I looked at Death Wish (1974) & noted that Inspector Frank Ochoa, assigned to stop the “Vigilante,” used an inhaler that wasn’t familiar to me. I asked a doctor about it & he had two ideas: “Some of the original Primatene Mist delivery systems looked like what the inspector has—a gray bulb with a plastic conical extension” & “Also the line of DeVilbiss No 41 Pocket Nebulizers looked something like it.”
My money is on the DeVibliss.
Casually, the doctor I queried made an astute observation,

…the inspector is struggling with a bad cold and is using an over-the-counter inhaler, probably with neosynephrine. There were dozens of these in the ‘70s—Oxymetazoline, Ipratropium or one of the other decongestants. There was even one that combined low dose steroid and Neosynephrine. You would use it and get temporary relief and then a rebound congestion which you would again shrink with the decongestant—on and on…. The inspector is just having a recurring problem that makes him feel terrible and for which he seems unable to get more than temporary relief!

That’s exactly the inspector’s situation. The cold he struggles with throughout the film (he frequently snorts nasal spray, reaches for hard candy, etc.—all evidence of some ailment) is a neat symbol for the other chronic problems that face the inspector; specifically the Vigilante, more generally crime. Was this an actor’s decision or in the script or in Brian Garfield’s novel?
[ Screen shot from Death Wish (1974); Inspector Frank Ochoa utilizes a nebulizer. ]
Posted by Adam Golaski at 10:06 AM No comments: