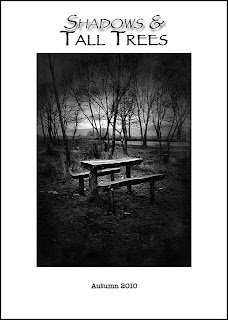 Issue first of Michael Kelly’s new journal “devoted to weird and strange fiction” is published. Of the six fine fictions, and not including my own contribution, my favorites are Geordie Flantz’s “The Ghost Days of Melody Brown” and Nicholas Royle’s “The Blue Notebooks.” I'd already read the Flantz story: it was originally sent to me as a New Genre submission. My intern Ashley Spears singled it out as worth my reading and she was so right. Immediately, the language catches the attention; here’s the first line: “That night the weather broke, and the land was born anew beneath a black baptismal rain.” It’s a long story, and I knew it wouldn’t fit the mood of the upcoming issue of New Genre, so I hailed Michael in the hopes he could pick it up for S&TT #1 and I’m very glad he did. Really, it elevates the whole issue. (By the way, Flantz sent me something else that is exactly right for New Genre, and will appear in the next issue—more on that later.)

My first exposure to Royle was his “Very Low-Flying Aircraft” in Exotic Gothic II (edited by Danel Olson). I didn’t think much of it. (Note that Ellen Datlow liked it very much, praising it frequently and including it in her Best Horror of the Year Vol. 1, and obviously Olson liked it; purchase EG II or Datlow’s best of and decide for yourself.) Royle’s “The Blue Notebooks,” however, I liked. It appeals to me for the way it brings so much together and so vividly: eyesight and degenerative illness, abandoned structures, libraries, birds, and suicide. Royle obviously loves abandoned and locked-off spaces (as I do) and is fascinated by the difference between what we see and what is. I’d love to see this story made into a novella, or as part of a triptych.

The other contributions are good too: Simon Strantzas’ story compliments my own (or vice-versa, if you’re from Canada), Sandra Kasturi’s is a very physical ghost story, and Joel Lane’s tale of a man back in his rotten hometown during a winter holiday is utterly Lane-esque, i.e. nasty and despairing. Promising, too, is Kelly’s inclusion of reviews. I look forward to the maturation of this non-fiction section. Within the genre(s), there is very little worthwhile criticism; S&TT, paired with the efforts of Supernatural Tales might fill the void left by All Hallows.

And Wormwood, edited by Mark Valentine. It is the only journal entirely devoted to the criticism of supernatural/ weird/ horror fiction I consider worth reading. I wish its scope were broader—not that I find its focus a flaw; I’d simply like to see the Wormwood standard applied to contemporary and mainstream genre fiction. 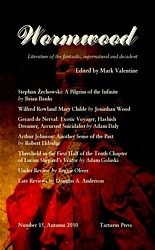 I have yet to finish this latest Wormwood, but am currently enjoying Jonathan Woods’ essay on the poet Wilfred Rowland Mary Childe. Adam Daly’s essay on Gerard de Nerval is excellent (it’s hard to tell who is a poser and who is honestly weird and who is just plain crazy—Nerval was all, poor bastard) and so is Robert Eldridge’s short piece on the weird fiction of Arthur Johnson. I’m very pleased—for reasons I’ve stated above—to see Reggie Oliver’s new column “Under Review.” He discussed recent books by Quentin S. Crisp, Adam Nevill, and Mark Samuels.

My own contribution is unusual for Wormwood, as it’s a hybrid piece of criticism and fiction. “Threshold in the First Half of the Tenth chapter of Lucius Shepard’s Viator” uses that small portion of Shepard’s book as a jumping-off point for numerous considerations of threshold, while also criticizing both versions of Shepard’s book. Thanks to Nick Gevers at PS Publishing for the Viator Plus ARC—he probably wondered if I would every get around to writing my review.

By the way, I’m sending postcards to anyone who orders a copy of S&TT #1. On each card is a line from a fiction in progress, or from one of my notebooks. If you come across that line when reading one of my stories, and let me know that you have, I’ll send you some additional treat. The decaying leg of a camel, or a book, or jewelry made from the bones of my enemies.
Posted by Adam Golaski at 12:16 PM 2 comments: 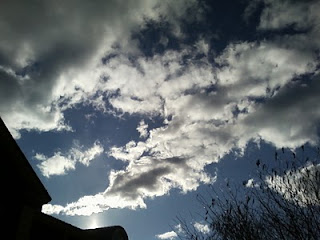 Last time I was in DC it snowed. DC is no stranger to snow—last winter friends living in the city sent pictures of picnic tables set with five feet of snow while plows made mazes on the boulevards along the Mall. But the last time I was in DC was in May, so to see snow fall was… beautiful—but ominous. Someone in that city made a deal with the devil.

Maybe on Thursday I’ll find out who.

This Thursday—November 11th—I’ll take the train and join stalwart pal John Cotter, fellow Rose Metal Press author Sherrie Flick, and the poet Maureen Thorson at the Black Squirrel where we’ll read as guests of the Barrelhouse Presents Reading Series. We start at 7pm. More info here, at Sandra Beasley’s Chicks Love Poetry blog (thank you, Sandra), and here, at Maureen's Applies to Oranges blog.
Posted by Adam Golaski at 1:05 AM No comments: