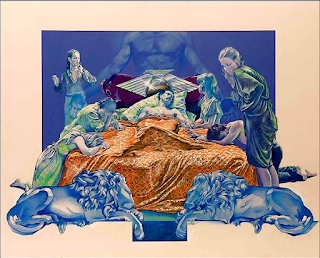 My youngest likes Black Sabbath’s “Iron Man.” She digs the Dalek-intoned “I AM IRON MAN” and the coda—signaled by Bill Ward’s snare at about minute 4:40.

…the story of a man who time travels into the future and sees the apocalypse. In the process of returning to the present, he is turned into steel by a magnetic field. He is rendered mute, unable verbally to warn people of his time in the future and of the impending destruction. His attempts to communicate are ignored and mocked. This causes Iron Man to become angry, and drives his revenge on mankind, causing the destruction seen in his vision. Now that is Heavy Metal!﻿

stevieray56 makes sense where there is no sense: Iron Man may “Have traveled time / for the future of mankind” but he “Kills the people he once saved”—at what point did he save the world? If he saved the world, he prevented the apocalypse, then kills the people he saved but who mocked him. And stevieray56 can’t decide if Iron Man traveled in time physically or mentally. I’d argue physically, through a “magnetic field” that turns the Iron Man into steel. (If you pass an iron man through a magnetic field he would remain iron but become magnetic. To become steel, he’d need to be melted and alloyed with carbon. Whatever.)

(“Vengeance from the grave”—what grave? There’s no grave!)

It doesn’t matter if the lyrics are dopey on the page; what matters is the way they’re sung and generally what they describe.

I’m taken with the dumb steel man “the people” wonder about. “Has he thoughts within his head?” the people ask. A dormant god. Woken by…? “He just stares at the world” then “Now the time is here.” I’m reminded of Talos, the bronze man who defends Minos’ Crete from invasion and is ultimately defeated by Medea as she travels with Jason and the Argonauts. Is Talos a leftover from the Bronze Age—simply an example of what men were? A metal man who traveled through time the way we all travel through time?

My youngest refuses to listen to any other song by Black Sabbath.

In the wake of the 2016 election, a colleague asked what music I found myself listening to; Black Sabbath and Philip Glass. Mostly Master of Reality, the song “Sabbath Bloody Sabbath,” and the Elektra Nonsuch Music with Changing Parts. That semester I taught John Darnielle’s Master of Reality:

…and I was living my teenage dream: up to my elbows in sticky bloody ground beef, which I was feeding methodically to a loud and potentially very dangerous machine. I was alone, and in control, and nobody was going to bother me, and I sang along as loud as I could with my Black Sabbath tape.

On the highway in between Connecticut and Rhode Island I listened as two FM signals crossed. Peter Gabriel’s “Spiel Ohne Grenzen” blended with Queen’s “We Will Rock You”: “Shouting in the street, gonna take on the world some day”; Gabriel’s cheerful whistle; static.
Posted by Adam Golaski at 11:30 AM No comments: 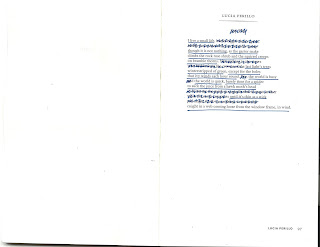 “When I was 26, I got 13 stitches in my chin after fainting toward a French door and breaking a pane of glass with my face.” Twenty-six? More than a decade ago? I shot footage of those French doors on my Motorola RAZR.

T. Cole offers “a special shout out to the nonwhite people in the audience.” He claims he’s the reason they’re at the reading; E. Gabbert says, “I brought you.”

Elisa reads “one more”—“We’ve never owned property, and our families aren’t in a position to contribute to a down payment.”

Mentions her friend Katie, crushed by a gallery wall, in both essays. The power of this anecdote. Richard Serra.

T. Cole talks. Doesn't lead a discussion or engender conversation. Elisa listens. T. Cole asks of the audience if anyone is happier than they were ten years ago. Four women respond. He categorizes each response. He is pleased women commented because, he says, it’s usually men who comment. He interrupts Elisa. He decides to read another essay from his book during q & a. He tells anecdote about losing keys and worrying that he’ll end up in the news like Henry Louise Gates. He asks, “How is everybody feeling? Uncomfortable?” Yes—when will you give Elisa an opportunity to speak uninterrupted?

She answers a question about the lack of an index in The Word Pretty. Is frank about it—there was a rush to get the book done. She's asked about craft. Her answers are concise and honest.