Suffering from a bout of angst, I found myself a bench a little ways away from the conference hotels and took out Mandelbaum's Iliad. A gentleman, waiting for his lunch companion on the next bench, asked what I was reading and when I told him he and I had a brief conversation about the translations of Greek and Roman classics that we preferred. In about a minute all I knew on the subject was exhausted. The gentlemen, Paul Dry, told me that he is the namesake of a small press that mainly does reprints, and that if I stopped by his table at the book fair he’d give me a copy of the Arthur Golding translation of Ovid’s Metamorphosis. Thus he unwittingly but ably cheered me.

And his Metamorphosis is a fine edition, based on the edition edited by John Frederick Nims. The cover, designed by Adrianne Onderdonk Dudden is striking—an elegant grid transforming patterns. Also included is an essay by Jonathan Bate that discusses the influence of the Golding Metamorphosis on Shakespeare.

Much later that night found me in a café called Luna (for the second time) with poets Kristin Kostick and Andrea Henchey. Matthew Klane, by this time, had called it a night. Andrea was in her own world, possessed by a series of lyric poems she conceived over a gin fizz and had to write down immediately. As text messages. I’m eager to read them/hear them read at the next Inescapable Rhythms.

This left me and Kristin to entertain each other. We talked civilization. What is it, and just how civilized are we? We talked Mumbai: the extreme proximity of its wealth and poverty. Civilization is peace, or freedom from fear, I figure. When we called it a night, I put Kristin and Andrea in a cab and returned to my hotel, where I talked with C.S. Carrier for a while about typewriters. Better than laptops for dictating epistles from the dead. For writing “shapes transformed to bodies straunge.”
Posted by Adam Golaski at 10:11 AM No comments: 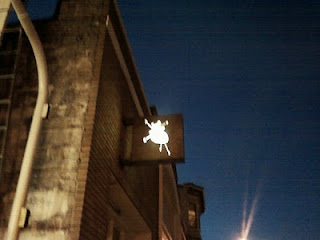 Kristin Kostick sent me a text, told me I had to go to the Book 12 reading down near Eastern Market. I read the text, then deleted the text, and flipped the numbers in my head: instead of 1337 St. George I walked to 1373. Since the street entrance to 1373 was dark, I ventured down the cobblestone alley that ran alongside. There was a velvet rope and a sign (an illuminated human heart), so I figured I’d found the place. There was no line. I was late. I asked the bouncer, “Is the reading in here?” He nodded, shone a little light on my ID and waved me in.

Nothing was going on inside. It was an empty bar. No bartender. No bottles of anything on the shelves behind the bar. But: I heard voices and applause. Coming from above. I found the stairs and climbed them. There I found a big open room, a stage with drawn curtains at one end, and dozens of round tables on the floor and lo! a bar with a bartender and booze. The only lights on in the space were strands of green lights, webbed across the ceiling. Many of the tables were occupied and a poet was on the stage. I couldn’t understand what she said. I went to the bar, leaned against it and ordered a drink, scanning the room for Kristin. A number of women in skirts and with thick black hair were seated among the crowd, but I wasn’t sure if any of the women were her. I turned to the bartender to ask about her gin selection—the low light made it impossible for me to read the bottles.

The bartender didn’t reply, didn’t even move. I figured she was listening and I was loathe to interrupt but she was the bartender so I said, a little louder, “Excuse me. What gins do you have?” Again, no response. I moved down the bar a little, as close to the bartender as I could (odd, I thought, that no one else is at the bar) and that was when I realized the bartender was a mannequin.

I admit I recoiled from it, and backed clumsily away from the bar. I looked around, to see if someone was watching me, maybe laughing at me? I looked around and the stillness of everyone in the room—even the poet—became horribly apparent to me. There was no actual person in the room but me.

That there was the sound of speaking and then—it happened while I was in the room—applause—tipped the balance from interesting-weird to freaky-weird and I got downstairs right quick, worrying a little that the bouncer was not only in on the gag but that he was in on the gag and the gag wasn’t funny. Indeed, by the door, stood a man.

As I approached him, I asked dumb questions, trying to keep my cool, “Is that an installation? Where’d you get all the mannequins? Was the whole event the poem?” until I saw that, like the bartender, he was a mannequin. I cursed and brushed past. Doing so, I knocked it over, and it fell and shattered. I didn’t look for someone to apologize to, I just took off. Once I was a good distance from 1373 I texted Kristin who was like, “Where have you been?” and gave me the correct address.

I don’t remember much about the Book 12 reading.

[I should mention that John Cotter and I are reading in the Yes! Reading Series this Sunday. The reading starts at 4pm in the Social Justice Center, 33 Central Avenue. More information about the reading can be found here.]
Posted by Adam Golaski at 9:12 PM 2 comments: