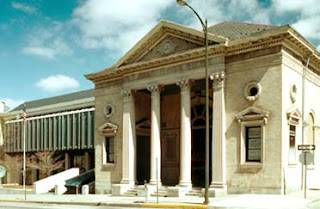 Arrived in Allentown during a thunderstorm. Crossed the 8th Street Bridge (a bike rider in green claimed the right lane), drove past residences built in a style I’ve come to associate with what little of eastern Pennsylvania I’ve seen (Federal style?), along St. John St. between Zandy’s Steak House (housed in a peach-stucco “small, depression-era theater” and Double Decker Records, to the Allentown Art Museum (AAM).

The AAM is full of little surprises. Anton Woensom von Worms’ “Suitors of Mary” (1541), based on a story from the apocryphal Book of James; Hans Moller’s Matisse-like “Lemons” (1949); Maurice Richard Grosser’s “Red Cabbages” (1939); and Sidney Ed Dickinson’s “Mary and the Studio” (1924). A security guard played (at my request) four of Harry Bertoia’s sound sculptures—“expensive wind chimes,” he said—though he did not completely dismiss them; he was keen for me to hear how the sound came from the base and played the sculptures in a sequence meant to impress (the final sculpture clanged like church bells). I liked Jesus Rafael Soto’s “Multiple V” (1969) sculpture, which appeared to vibrate and Nelson Shanks’ portrait of “Nancy” (1974).

An exuberantly painted landscape by Franz Kline, a mural painted for the American Legion Post 314 hall and removed to the museum in 2016. I like Kline’s magnified black brush stroke paintings from the 50s; I didn’t like this, though I gather it’s a characteristic example of his work from the 30s – 40s. He’s from Allentown. The video about moving the mural is fantastic.

Upstairs, is Carl Joe Williams’ “Waiting” (2016); I wasn’t initially drawn to it—though colorful, it seemed flat. But: the scene, a man wearing a Nike sweatshirt and a woman seated with her baby, the sign “checks cashed” above her is full of radiating circles—halo-like around the subjects’ heads—and like ripples in water. AND, it’s painted on a twin mattress, the sort you find as detritus in economically depressed cities (Hartford, CT, where I lived for 7 years, for instance—maybe Allentown?). From Williams’ site I see he paints on doors, palates, fencing, and, television sets—but the mattress, that’s brilliant. Grossly intimate, awkward. Next to the Williams’ was Romare Bearden’s “Circe” (1978), which looked to me like wall-to-wall carpet. The image echoes Manet’s “Olympia.”

I was curious about Didier William’s “La Croix a Samedi” (2016)—it appears to be damaged. I asked a guard—he didn’t know. A spot where the wood look worn through. Compare it with “Mawon”—which is clearly not damaged.

When I left AAM, the sun was out, the sky blue, clouds cumulus and massive, and North 5th Street was brilliant. Sorry to go.

My consolation: I caught a fantastic broadcast on WFMU—Vladamir Tarasov’s “Atto III: Drumtheater” from Experimental Sounds Behind the Iron Curtain. I put up the volume, rolled down the window, and basked in highway traffic, humidity, and Russian noise.
Posted by Adam Golaski at 1:12 PM No comments:

For example: “Nowhere is the Best American Barrage of names so relentless as in the first sentences, which are specific to the point of arbitrariness….” To clarify, she cites the first sentences of two stories, the first by Trudy Lewis, the second by Tom Bissell; here’s Lewis’s: “The morning after her granddaughter’s frantic phone call, Lorraine skipped her usual coffee session at the Limestone Diner and drove out to the accident scene instead.”

Most of Batuman’s pet peeves are elements of style subject to fashion. Lewis writes that first sentence because she’s seen others like it. Maybe she’s thought about it and decided she likes it, or maybe she hasn’t thought about it, but instead absorbed it. Either way, she identified a template. Batuman assumes Lewis (and other American short story writers) learned the template in an MFA program or by reading the Best American.

That a majority of American short story writers are bad at short story writing—or worse, are dull—is not evidence that the form is dead. If it’s evidence of anything at all, it’s that many people who write short stories don’t read enough of them and that it’s hard to write a good short story. But it’s much more cocktail-party exciting to declare something as “dead.”

Of the stories Batuman read in the two volumes of the Best American she perused for the sake of science, she found only one of interest. What stood out to me—and is unremarked upon by Batuman—is that story is a fantasy story, bordering on horror, and it’s written by an author who exclusively writes short stories (not a novelist promoting a novel by dashing off a short story; not a budding novelist writing short stories in workshop as some kind of practice). Fantasy isn’t bound by the strictures of realism and thus may, by accident or by design, avoid the clichés of realistic (AKA “literary”) short fiction. (Fantasy has its own clichés.) An author committed to the short story form is (hopefully) reading a lot of short stories. More, perhaps, than the novelist who dabbles.

(Please note, I do not mean to suggest that great short stories and great novels can’t come from the same author.)

She ends her essay with a mini-manifesto, that will no doubt dog her forever: “Write long novels, pointless novels. Do not be ashamed to grieve about personal things.” (Setting up her declaration, she writes, “American novelists are ashamed to find their own lives interesting….”) She’s giving herself permission to shoegaze, and I dig it. Sure!

(Last night I opened up the March 4th issue of The New Yorker [for which Batuman is a staff writer] and read the first sentence of Jonathan Lethem’s short story “The Starlet Apartment” and lo: “When Peter Todbaum and I were twenty-five, and three years clear of Yale, I lost track of him for a short while.” It’s a model of the Who What Where Why When & How first sentence Batuman finds so irritating—going strong, thirteen years after she published her American short story post-mortem.)
Posted by Adam Golaski at 1:58 PM No comments: