David Shields invited me to watch I Think You’re Totally Wrong (2017*), directed by James Franco. It’s an adaptation of an argument between David Shields and Caleb Powell. Its subject, ostensibly, is a life dedicated to art (Shields’) vs. a life dedicated to living (Powell’s). That’s a dumb argument, and it’s quickly apparent Shields and Powell aren’t really arguing art vs. life, but success vs. failure and who is a better man. James Franco’s appearance in the film radically distorts those arguments—Shields and Powell and their discussions are utterly dwarfed by Franco’s larger-than-life presence.

After I watched the film, I sent Shields my comments; I asked if it was okay to post said comments. He said he’d be “honored.” What follows is a selection from my comments.

Why “white guys bullshit”? Are there no books and films in which two black guys bullshit? Two Pakistani women? Is it difficult to recognize when people from a culture not your own are bullshitting? Why “bullshit?" and not dialogue? Dialogue can't be too rarefied if what follows “white guys bullshit” is “Apollonian and Dionysian.”

David explains why Caleb. Caleb does not explain himself. David wants to be questioned; Caleb want to have a good time (according to David).

[Un-focus my eyes and see thru Caleb.]

Conversation about homosexuality—Caleb's—“you trying to Mark me?” Caleb’s wife's privacy.

Broken leg. Coma. How do you avoid the tendency to always have a reply anecdote? To one-up?

David: "Here's are chance to reanimate both your art and my life." [Is this line scripted? Rehearsed? Previously articulated?]

Caleb has four-wheel drive, snow chains, he helped build the deck, he did some roofing. Blue collar work. David lights a fire in the fireplace. “I'm Bertrand Russell who couldn't even start—who couldn't even boil water.” Caleb doubts this anecdote. Good on Caleb--how could you not? Russell's teapot. Caleb suggests maybe Russell didn't boil water. More plausible, but still not likely. The kind of anecdote artists perpetuate about other artists and themselves. What does that anecdote admire?

Caleb: “You can't just play to play.” According to David, Caleb's work lacks an “x-factor.” “It's not making any meaning.” “Your work stands next to the world.” Chess = a game, a competition, intellectualism. Caleb drinks beer, David, water.

David and Caleb do not look alike, tho it would be easy to reduce them to two bald, white middle-aged men. Collapse the split screen.

Why is it making the world better vs. art? Is the only way to make the world better to directly engage with some kind of politics? Another false dichotomy: the “real world” vs. the academic world. Is David strictly an academic, or is he an academic and a practicing artist? The real world = changing tires.

Caleb has never earned more than $20,000 in a year. David earns approximately $170,000 a year. What does James Franco earn per year? How much is changing a tire worth?

What James is interested in is being an artist. And being an artist, for James, is taking risk. He uses the word “stake"—as in, what's at stake. A very writers' workshop term. [In the voice of my least favorite professor: But, Adam, what exactly is at stake here?]

I like James' presence is this film a lot. It's so bizarre. He walks among us.

Expression in this film. When Caleb describes Waltz with Bashir, he becomes visibly upset. David, in response to this, sits up—he knows it's no longer appropriate to lay sprawled on the couch. David is a performer—he's a professor! Caleb appears not to perform. Caleb becomes emotional when describing a work of art, not when discussing his family, or being overseas—i.e., his life.

That art causes Caleb to choke up is the big twist David suggests a film needs.

It goes without saying that James is an actor too. James also writes fiction—David sees fiction as a “veil.” “The moment it was fiction, it was dead. The Moment it was nonfiction, our nerves jangled.” Maybe fiction creates a space between author and material so author can breathe, but the author is always held accountable.

Caleb “confesses” he took photos of David asleep. Did he? James' shadow follows Caleb and David to the car.

[ *IMDb states that the films release date is 2014. I asked David about this; David asked Oliver Ike, president & founder of First Pond Entertainment, if that date could be changed. Ike wrote, “The year listing cannot be changed. They go by production year.” Why would IMDb do that? Obviously the date we want is the release date. ]
Posted by Adam Golaski at 11:43 AM No comments: 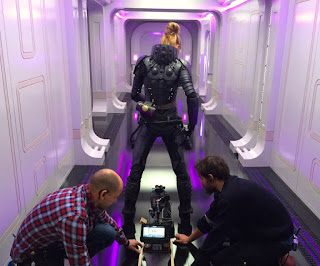 But “Because” is not an example of a perfectly good song that’s been over-produced. George Martin’s performance on the spinet electric harpsichord and George Harrison’s Moog synthesizer performance perfectly marry old and new.
Posted by Adam Golaski at 9:28 AM No comments:

If we can overlook publication dates—Shirley Jackson’s novel We Have Always Lived in the Castle, 1962; No Doubt’s song “Sunday Morning,” 1995—it becomes clear that Jackson’s last novel was influenced—nay, transposed—from Gwen Stefani’s lyrics.

This, from chapter four of We Have Always Lived in the Castle:

It was really too late, although I did not know it then; he was already on his way to the house. … All Jonas and I knew then was that we were hungry, and we ran together back to the house, and came with the breeze into the kitchen.

And this, the chorus of “Sunday Morning”:

Essentially, all Jackson did was take Stefani’s lyrics and reverse their order. Compare: Jackson, “Although I did not know it then”; with Stefani, “I thought I knew you well, oh well.” Most damning, Jackson took Stefani’s “You came in with the breeze” and retouched it: “…and came with the breeze….”

Jackson’s detail “the kitchen” is also lifted from No Doubt, and this is her most insidious act of plagiarism. The video for “Sunday Morning” very clearly shows the band in a kitchen.

Surely this revelation will invigorate scholarly investigation into No Doubt's influence on the American literature that preceded the band's formation.  Specifically, it points to the grotesque robbery of ideas perpetrated by Shirley Jackson. I am currently using the most advanced comparative techniques available to determine once and for all if No Doubt’s “Hella Good” produced Jackson's Haunting of Hill House.
Posted by Adam Golaski at 11:47 AM No comments: