99. An unfinished review of a } Secret Europe. 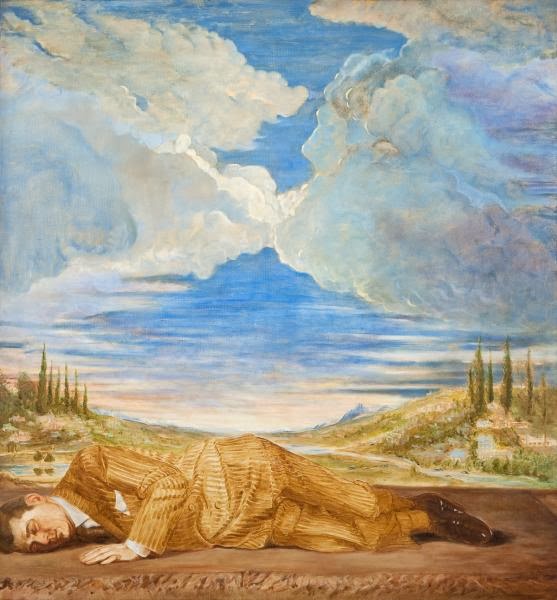 Mark Valentine’s descriptions of the Marais Gat, a country of salt water marshes, and the pitiful habitations built there, are clear—all is sodden, rotted and rusted, all is silver-gray. These “wastes” are lovely. When there is color, they are warm colors: “a pane of gold,” red and yellow bed clothes—and belong to the narrator’s hosts, brother and sister Alain and Jeanne, who are themselves warm people. Neat technique. An example of Valentine’s control.

The narrator of “The Other Salt,” Etienne Frank, is in Marais Gat as the result of a long search for:

The “other salt,” that was what he was here to find, if it existed. A different salt that old chroniclers mentioned respectfully in their accounts… the “other salt,” rarer than all the spices of the east….

When he finds it, the calm melancholy of the landscape transforms. With a few deft strokes, the quaint notion of folk who are “salt of the earth” suggests a long history of atrocity. A history of humans exploited, all for the pleasure of a rarified few.

“The Other Salt” is a story in Secret Europe, a collection by Mark Valentine and John Howard, published in 2012. There’s a poorly written review of it by Jeff VanderMeer here. If you can get through the thicket of superlatives and book review cliché (“luminous”), you’ll find links to “The Fall of Ashes,” another Valentine story from the collection, and a link to a better written review by Mark Andresen. Andresen hopes the book will be reissued, so it may be discovered by a larger audience. Me too.

Stories from Secret Europe have popped up elsewhere, and I’m especially pleased that “The Other Salt”—one of the best horror stories I’ve recently read—is included in the second Swan River Press selection of Valentine’s fiction, Seventeen Stories. As for John Howard, the Swan River selected Written By Daylight also includes a few from Secret Europe, “Wandering Paths” among them.

Paths cut through tall grass by a man with a scythe. “How do you know where to go?” Vasile, protagonist, asks. “I’m allowed to do it my way.” Paths shaped by “hissing grass” and flowing water. Fluid way. What happens happens “in the light of day”—minutes after noon, under an oppressive sun. Are the meadowland paths a part of the gardens at Brukenthal Palace, or is Vasile elsewhere?

That he’s at Brukenthal is out-of-schedule: a day taken from work, a place familiar but, “…small towns in this part of the country all looked much the same….” For Vasile to be at the Palace is a perverse choice: it was Mirela, the woman he loves but who does not love him, who suggested it for a meeting to discuss their future she cancelled with a text: “there was no chance after all of her changing her mind.”

John Howard’s “Wandering Paths” makes physical Vasile’s psychic state. Heat and sweat, bitterness, a desire to be alone with his embarrassing self-pity—Vasile’s life in those hours is human—real—until he reaches the meadowland. There, he enters myth—Pan, Death, confusion, and peace.

These landscapes, so rightly described, connect. Reminiscent of childhood rambles. Salt marshes, tall grasses; these environments stand out in the otherwise urban landscape of Secret Europe, but “The Other Salt” and “Wandering Paths” may also be the best stories in the collection. And they stand well on their own; most of the stories in Secret Europe are best in collection.

I don't know what's going on with Ex Occidente, the publisher of Secret Europe. After Transactions of the Flesh was published, I've heard nary a word from Dan Ghetu or his new associate, Jonas J. Ploeger of Zagava Books, in spite of assurances I would; the Ex Occidente website has vanished and while the Zagava Books site is up and running, it's far from informative. If you've a few hundred dollars to spare, you can still purchase Secret Europe from other sources—and it is very good, but you might do better for the time being with the Swan River selecteds, in spite of the real value in reading the stories of Secret Europe in concert with each other.

[Image: Eoin Llewellen's "Man Sleeping in L.A. Apartment" (2011), which appears on the cover of John Howard's Written By Daylight.]

[Update: Mr. Ploeger sent me a note on Feb. 17th and asked that I "look at Zagava's website if you find the time." I've done. Now, there are five new titles listed. Information, but not yet informative.]
Posted by Adam Golaski at 1:19 PM No comments: 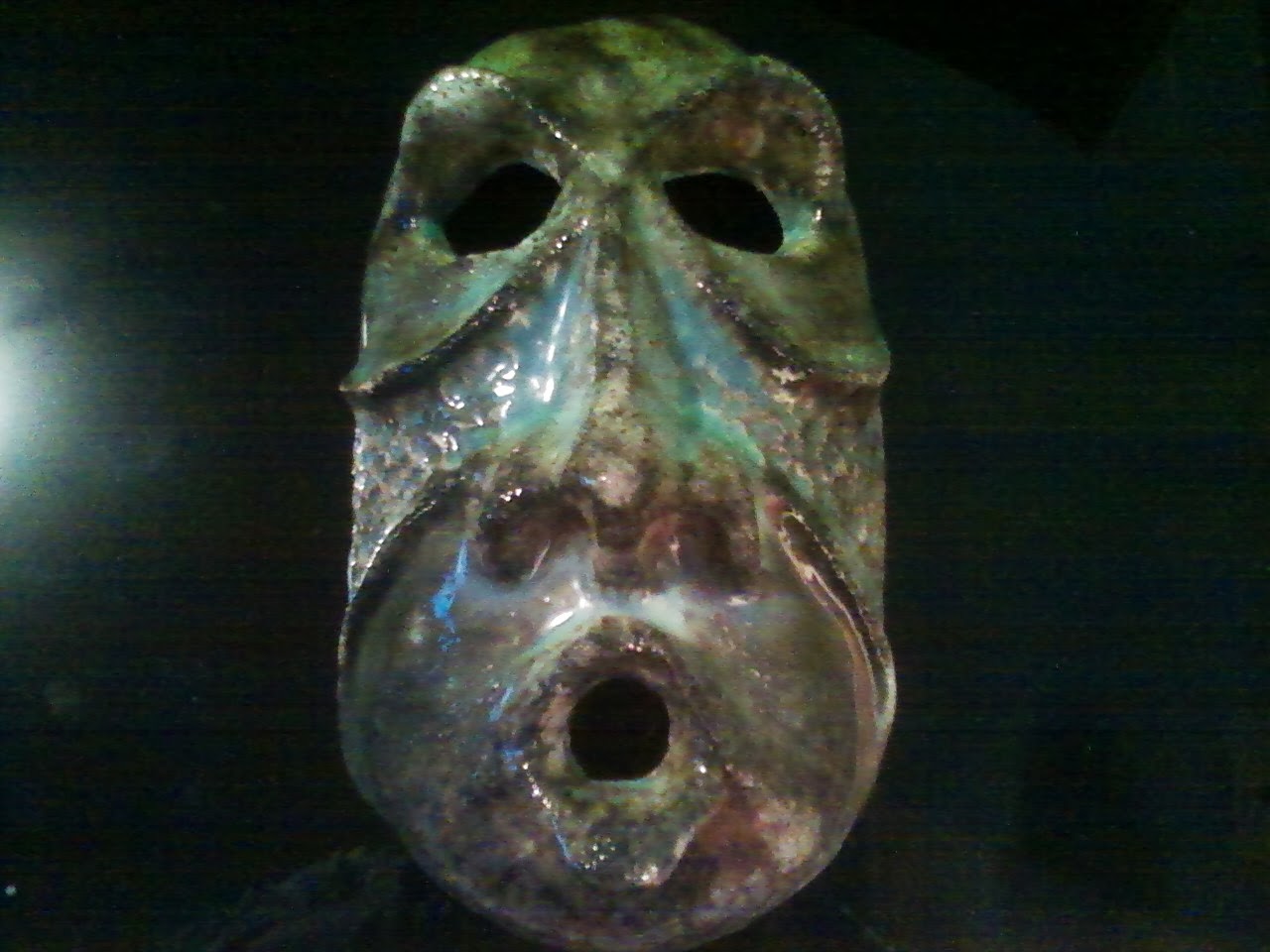 March, 1953, The Hall of Fantasy, a weekly radio series broadcast “an original tale of fantasy by Richard Thorne entitled,” “The Masks of Ashor.” The story begins when Marsha’s Uncle Harold sends two gold masks. Marsha’s husband, Bert, says that the masks are “…beautiful, except grotesque at the same time”; his wife adds, “well they look human, and yet….” In spite of their uncertainty about the masks, they decide to hang them up on either side of the mirror that hangs above the fireplace in their living room.

Accompanying the masks is a letter from Uncle Harold. The masks are from Istanbul, they’re gold yet the seller sold them for very little—was eager to be rid of them—and, “there’s some kind of story connected with them, I don’t know what it is….” When Uncle Harold finds out, he rushes to save his niece and her husband from  the true owner of the masks, Ashor—but too late.

Last year—in March, as a matter of fact, I received a pair of masks in the mail. I have no Uncle Harold, but an Aunt Eileen. One of the masks is pictured above.

During my Color Plates book tour, I was handed a play, properly, a masque, by an actress leaving what I presumed was an audition taking place in the space above the bar where I read. I transcribed some of the “Black Masque” here, in the hope someone would claim authorship. No one has. Though I am not the author, I tend to think of it as mine.

My copy of Transactions of the Flesh arrived a little ahead of Christmas. I’ve only just started to poke at it, but see it includes “Indescribable,” an excerpt from M.O.N.’s ObliviOnanisM, a “profanely mystical work of hyperpurple theory-porn”—a description provided by ObliviOnanisM’s publisher, gnOme. The connection I made between gnOme and the masque handed me in New York City is gnOme’s aesthetic toward anonymity and an authentic kind of falsehood, the sort of truth that lives in, as gnOme has it, “pseudepigrapha” and “apocrypha.”

I believe the “Black Masque” is more than just a script; it’s a transcript, and when performed, a liturgy. 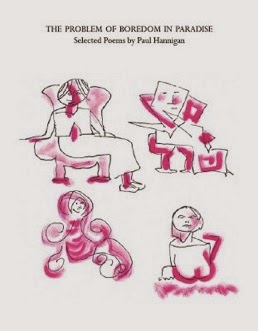 In a short end-of-the-year “best” piece for the Boston Globe, Don Share wrote about The Problem of Boredom in Paradise, the Paul Hannigan selected I edited. This project was completed with the help of Caroline Banks, Hannigan’s widow. I won’t go into details here, but she helped in numerous ways, most especially by her patient faith. I first contacted her nearly a decade ago, and years went by with little progress made. “Touching” is the wrong word—maybe “important”?—most important to me was the time she defended my editorship from another press—this, before I had any sure idea to whom I was going to submit a selected, if ever I finished.

Whether or not the book is the best book of poetry in 2013, Share’s praise will hopefully bring people to Paul’s poetry, and that’s what I want above all else.

If you shop Amazon for Emily Berry’s Dear Boy—another title Share recommends—Amazon will tell you that “customers who viewed this item also viewed” many other titles Share recommended, including Boredom, A Dark Dreambox of Another King: The Poems of Alfred Starr Hamilton, Collected Poetry by Bill Knott, Milk & Filth by Carmen Giménez Smith, etc. Also, I just discovered, Boredom all of a sudden has a review on its Amazon page, published days after the Globe article. A 2014 review for a book published in Feb. of ’13.

There's a line from the review I find intriguing: “I don't know how he must sound to younger poets now—probably too brittle and sarcastic.” This faintly echoes what Share wrote about me, “Time has been unkind to [Hannigan]; he died in 2000, almost forgotten. But his work was discovered by [a] young [poet] who [has] lovingly prepared a new selection....”

What’s all this about young poets?

The advantage I have over those poets who knew Paul is that I do not know him as they do. Some of his peers are quick to “remind” me that he was a pain in the ass, which may be why they couldn’t bring his work back into print.

Friendship is complicated; the following are four stanzas from Paul’s poem “My Friends”:

Some of them
Are my friends
Smiling as if they
Were cutting a wedding
Cake or buying a
New car.


You can tell
From the picture
They all speak English
And lies.


Slithering over the foot-
Board of the bed in which
I am unexpectedly dying.


All the while I edited Boredom, I wondered how I will react when some twenty-something calls me up out of the blue to talk about the brilliant poet they discovered who isn’t me but a pal of mine.
Posted by Adam Golaski at 12:08 PM No comments: