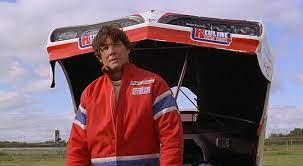 Watch Crash (1996). Then watch Fast Company (1979).
Insectoid machinery: the “Lonnie Johnson designed quadravene blower.” A prototype quadravene blower stares at Lonnie from his desk; it causes Lonnie’s “fueler” to explode during a race; Lonnie walks away from the explosion unharmed.
Wide shots of sunrise & sunset. Bright reds & blues (see the children’s snowsuits in The Brood, filmed during the winter of ’79.)
Homoerotic back-&-forth between ostensibly heterosexual men: “Then you’ll be suckin’ my pipes”; “Why don’t you go behind the truck and give yourself a valve job!”
Lonnie’s girlfriend, Sammy (Claudia Jennings), works where? It’s her own place, called “Sammy’s.” We see a cash register & a row of glass bongs on a high shelf (lemon yellow, fire engine red, jade green). Lonnie calls her “Sam.”
Antagonist Phil Adamson (Fill, as in oil, as in penetrative sex; Adam-son, as in Cain) flies a single-engine airplane (similar to the plane Catherine Ballard flies & that sexually arouses her). He flies w/ Candy, says, “They crawl, we fly,” & puts his hand on her thigh.
At minute 19:53, shot of security guards w/ bad skin. & the great face of the announcer! Toothy like Tom Petty.
The FastCo. crew is in Helena, Montana; on the wall behind the announcer is a poster for “Inland Empire shows.” (David Lynch, born in Missoula, Montana, directs Inland Empire in 2006).
Close-up shots of funny car interior. Billy’s hands on the steering, switches. Billy wears goggles & a respirator, reminiscent of the pilots on the album sleeve for Black Sabbath’s Never Say Die! (1978). Close-up shots of funny car parts. Lonnie stands w/ the mouth of a funny car wide open behind him.
Auto-erotica: Billy picks up two hitchhikers (unnamed, played by Cheri Hilsabeck & Sonya Ratke); takes them into the FastCo. trailer for sex; he opens a can of motor oil & pours it on Sonya’s bare chest. Shortly thereafter, Billy consummates his romance w/ Candy on the bed in Lonnie’s trailer/office; Sammy finds them in bed &, once she understands what she’s seeing, joins the pair; Lonnie shows up & shoos Billy & Candy out so he can have sex with Sammy.
At 1:23:18, “the fiberglass bodies are lowered over the drivers”—the final race, at night, culminating, inevitably, in an explosion & death; a man in flames against a starless sky.
Lonnie must destroy Phil: drives his funny car into Phil’s plane; Phil loses control & crashes into the side of a black trailer. “Maybe the next one, darling. Maybe the next one.”
[ Months after shooting Fast Company, Claudia Jennings (Sammy) died when she crashed her Porche on the Pacific Coast Highway. She was 29. In 1969, she was playmate of the month in November; she appeared on television & in films, including The Man Who Fell to Earth (1976) & Deathsport (1978)—a film about an apocalyptic future where people kill each other using laser guns & dirt bikes. ]
Posted by Adam Golaski at 10:38 PM No comments: