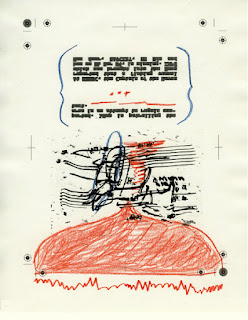 Four phrases rearranged from “Capitol” so I might hear them together:

The poem’s formal tone is broken in the line that follows the second “heaps of stuff being sold.” Read, “the ones who seemed like dicks” and, four lines later, “dogs chilling in their roundabouts.”

“Capitol,” by Hannah Brooks-Motl, appears in issue 17 of Tupelo Quarterly. I’m perplexed by Henk Rossouw’s conclusion re. the “critique and careful hope” in the “superb ending of this poem.” Read, “magic from the bunker / or what’s coming but magic / said she”—bunkers, I suppose, are hopeful. Are “cautiously” hopeful. I sure hope to survive. I sure hope when I pop my little head out above ground there’s stuff (“heaps of”). Maybe the hope is in the phrase “said she”; the omega woman emerges, the last woman = magic: she’ll fix all this shit.

(In issue 18 of Tupelo Quarterly, by the way, is a new poem by C. S. Carrier, a scruffy brother-friend of mine from the Hartford days. He writes about stuff being gone.)

And in Word For/Word issue no. 33, a selection of Matthew Klane’s cut-up circular works. “The Other Pothole” recalls Sol LeWitt, er, rather, the cover design of MIT presses’ Incomplete Open Cubes; I’d call Klane’s piece “R to the Ople.” What do you get when you add r + ople? Hang the letter “l.” These pieces from a “summer-constructed daily practice junk mail collage” series. See issue no. 3 of ctrl + v, issue no. 56 of Fugue, and fall 2018 issue of Gasher for more (the Gasher collage stuff is the best of it, for my money).

Rosaire Appel’s Page Speaks series, made with crayon and ink on slightly yellowed paper that feature some kind of printer’s guide marks, is my favorite work in Word For/Word 33. Built around / over texts cut or grayed out, the orange and blue crayon scribbles are striking, enhanced by the black ink lines and smudges. I see staves, thought-balloons, and a snail’s shell. It’s lively.

[ Image from Page Speaks by Rosaire Appel. ]
Posted by Adam Golaski at 2:59 PM No comments: 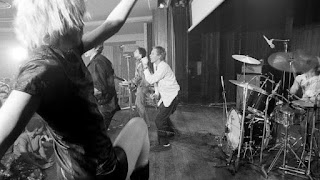 Voice over, Clair Wilcox, senior curator: …it’s one of the most important pieces Westwood and McLaren created.

Clair Wilcox: The sleeves are very long and they fold back and then this would clip onto here so making it, um, more wearable, but the notion of distortion, the sleeves reminds one a little bit of a straitjacket.

Clair Wilcox: But it’s really all about the imagery so here you’ve got a swastika, an inverted crucifix, the word “destroy,” and then lyrics from the Sex Pistols, “I am an antichrist.” And what Westwood and McLaren were doing with these punk garments was “confronting society.”

Cut to: photo of Westwood in “Destroy” t-shirt.

Vivienne says, “We invented punk” [that is, she and McLaren].

I love John Lydon, love post-Pistols P.I.L. (1978 – 86), but his antics did get stagnant—Westwood says, “…and he hasn’t changed, from being that phenomenon, unfortunately, he should have changed to something else by now.” Hard to be an iconoclast icon—what change it would require to smash that icon!

To her credit, Westwood later observes: “We wanted to undermine the establishment. The swastika, all these things, meant we don’t accept the values of this older generation. We hate it we want to destroy it don’t want it. We were youth against age, that’s what it was. But, it had affected fashion such a lot. The hairstyles, even, my spikey hair, was in Vogue one month later. And I realized that we weren’t really attacking the system at all. It was being marketed all the time. I just realized that the real marketing opportunity was that the English society could claim how democratic and how free they were that somehow kids could revolt as much as that. We weren’t attacking the establishment. We were part of the distraction.” 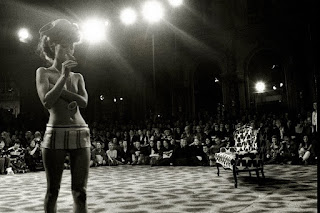 Vivienne Westwood [while she works at a top with an assistant]: “I think it’s going to look great. I’m going to put it on Kate Moss. [Cut to: Kate Moss, smiling.] She’ll look lovely in it.

Kate Moss: Those shows, they were so outrageous. You know, champagne is flowing, and we’d go out naked with lollipops [Cut to: topless Kate Moss on runway, circa 1994, eating a popsicle] and [Cut to: Kate Moss, circa 2014, in a shop (her shop?)] you know, just outrageous, but, but really glamorous at the same time. They were the ones who were [gasps] my god, so exciting.

Kate Moss: She’s a rebel isn’t she though, which attracts me [Cut to: Kate Moss, circa 1994], coming from Croydon we wanted to get out and she was, like, our queen.

Kate Moss: I remember the shows but I can’t remember which one; we were backstage and she said, “Kate, you know I’ve never been into girls, I could’ve got into you and then like hugged me she was like, I could have been her only lesbian lover [Kate Moss fist pumps] ka-ching!
Posted by Adam Golaski at 11:32 PM No comments: