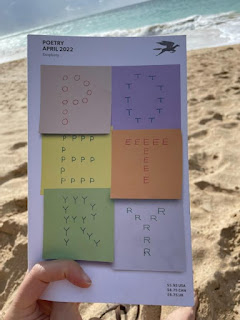 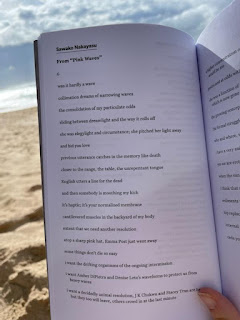 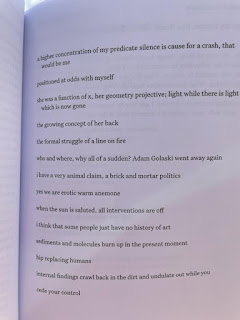 & she wrote, “This issue of poetry… did you know about Sawako's poem? I did a double take when I saw you there…”
I did know. Pink Waves, Sawako’s latest book, was written in a theater space. Visitors were encouraged to be in the space while she worked. Twice, I sat in the theater & wrote while Sawako worked. I drafted sections of “San Francisco Essay” (which will appear in an upcoming issue of Bennington Review).
The theater where she wrote was located beneath my office. Some mornings, early, I’d let myself into the dark theater before anyone else was in the building. Feel my way down the spiral staircase. Pause at Sawako’s worktable. Move past the mirror & through the black curtains to the exit.
I “went away again” in the April issue of Poetry; I am “going away” in the May issue of The White Review.
Posted by Adam Golaski at 10:42 PM No comments: 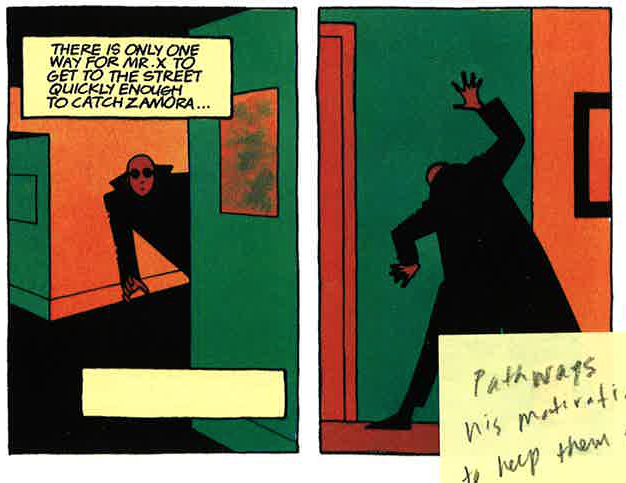 I keep toying with the possibility of proposing a book for your series... but I imagine you're well set for the future. I'd do Mr. X (Vortex) or The One (epic) or (heaven forbid!) Gore/Shriek (FantaCo). So much to think about.

Please propose a book! I’d LOVE a book about Mr. X (architecture & comics is one of my pet topics!) or The One!!! I haven’t thought about Gore/Shriek in ages, I’ll have to dig them out of my long boxes! There a lot of proposals I’m juggling, but a [sic] many of them are not very solid yet. There’s a lot of room to maneuver if you’re serious.

A week later I sent a 7-pg. proposal. What follows is from the first pg. of my proposal.
# # #
Definition destroys the beauty ambiguity makes.
Eye-level with the street, man-hole cover lifted light as a nickel, “It wasn’t easy for the man to return to the city”; his bald head, the thin bridge of his nose—his sunglasses reflect Radiant City. Behind him, skyscrapers and sky-bridges and spotlights. Or, behind him is the dream city “he himself designed” but left unfinished. Or, he is at the center of Radiant City. The city stands behind him and, reflected in the dark lenses he wears, in front of him. He is Mr. X.
Dean Motter, who “created and designed” Mister X, articulates (unintentionally) the problem with the original 14-issue run (1983 – 1988), “People remembered [Mr. X] without ever having seen him.” A better word than “seen” might be “read”—seeing Mr. X suggests much, but, “While the imagery that collaborator Paul Rivoche and I were developing looked interesting, the premise began to seem rather banal by comparison.” And, “[Mr. X’s] cache was, after all, his ambiguity. His mystique. His aura of menace. His sheer unconventionality.” Mister X is beautiful when it is allowed to be ambiguous, mysterious, strange. “But,” Motter writes, “that all seemed to be falling to the wayside the more I tried to define him.” Of course. Definition destroys the beauty ambiguity makes. Motter “& Co.” tended to explain rather than allow, to restart rather than proceed.
Nonetheless, Mister X was not resolved, so beauty remains.
# # #
After a follow-up from me, K. wrote,

Apologies for the big delay! We were pretty swamped with pre-sales for the Spring ’17 season. I’m planning on taking a look & giving you some feedback this week. I really appreciate this!

I never heard from K. again. My sense is that Critical Cartoons stalled or went in a different direction. Maybe my proposal is wretched. What do I know?
I know I like the proposal I wrote. Mister X is a flawed comic, but it loomed large in my teenaged imagination. The story is mysterious & it was mysterious in the world (my classmates didn’t read it & I couldn’t buy it at Dairy Mart, where I could always grab the latest X-Men or Batman).
My father bought me the first issue. I hunted & hunted for the rest.
Now you can easily get the whole thing from Dark Horse, complete w/ a hyperbolic introduction by Warren Ellis.
[ Note: Lars Ingebrigten wrote a good overview of Mister X on his blog here. The image above is from the Dark Horse collected Mister X, w/ my Post-it note (“Pathways / his motivation... to keep them secret?” attached. ]
Posted by Adam Golaski at 11:11 AM No comments: