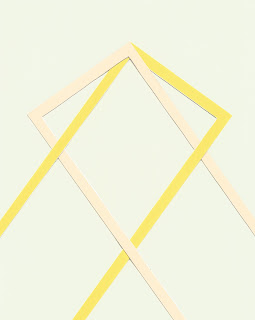 [ “Ampersand” from Matthew Klane’s Co-upt series & the cover image for my Voice Notes, a collection of poetry forthcoming from Spuyten Duyvil. ]
Posted by Adam Golaski at 11:54 AM No comments: 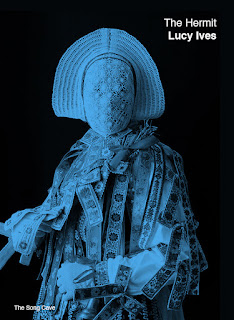 “I can’t describe myself as a poet. I’m the author of some kind of thinking about writing.” The Hermit is not poetry. Ives claims she’s a novelist. (36.)

Among several texts Ives wants to read is Susan Howe’s “Statement for the New Poetics Colloquium, Vancouver. 1985.” An essay-poem. Howe writes, “I wish I could tenderly lift from the dark side of history, voices that are anonymous, slighted—inarticulate.” Maybe a poetic, certainly a goal. A (mostly) impossible goal. An inarticulate voice is a voice kept hidden in the mind. There’s no way Howe can pull that out of the past. Ives is interested in thoughts she has but can’t quite articulate. Not quite the same goal as Howe’s; Howe wants to “lift” other voices, Ives wants to lift her own voice. (37.)

Can an artwork, made to articulate an idea (a vision), be used to understand an unrelated experience? Ives asks, “Could we use art to interpret daily life?” What distinction does Ives make when she writes “daily life”—as opposed to what other kind of life? Is “daily life” a euphemism for normal? (38.)

“I perhaps don’t read or write enough and yet always feel like I am reading, like I am writing.” Ives doubts this statement—thus, “perhaps.” Does Ives feel she doesn’t read enough useful writing? Writing that challenges &/or inspires? What is she reading instead of Susan Howe’s (short) essay? (42.)

“…(some kind of essay on collage). Attempting to ‘see’ the way in which the eye cuts out.” The eye pre-cuts what is cut by scissors / blade. Un Chien Andalou. (47.)

“Christine on literary realism: This is when coincidence and personal connections (interrelatedness) drive a story….” Christine, the titular evil car from Stephen King’s novel. Christine drives a story. (50.)

“When I was 13 I swore to myself that I would become a novelist.” Ives is a novelist. I have not read her first novel, nor have I read her third novel Life Is Everywhere (daily life?). From the publisher’s description, Life Is Everywhere is about a writer in a graduate writing program & about unpublished manuscripts. Loudermilk, Ives’ second novel, is also about writers in a graduate writing program (& the non-writer who fools everyone). Does Ives’ vow, made at age 13, interfere with her writing now? (53.)

“A dream: A night goes on for years. One must make use of public transportation in order to cross it.” To cross the night? Read E. M. Forster’s “The Celestial Omnibus.” (58.)

“I spent many years with a strong, almost violent feeling that there was much to live for, although I may have been inactive for much of this time.” A lust for life, but a life of fantasy & idea made actual on the page. (69.)

“Is there that which can only be seen in a glance?” See Ives’ collage essay idea. Ghosts. (70.)

In death, we are sent to the place where our belongings are & while our belongings remain we are never able to leave that place. Ghosts linger by their stuff. If, retroactively, we declare that property belongs to people long dead, we exile them to that spot. (73.)

[All quotes, unless otherwise attributed, are from Lucy Ives’ The Hermit, The Song Cave, 2016. The parenthetical numbers correspond to the numbered sections in The Hermit—there are no page numbers. I wrote about The Hermit before; that essay appears in 3AM Magazine. Ives read my essay & kindly responded, “Thank you, Adam! This is fascinating. I appreciate your sleuthing, re: the meanings of the text.”]

Posted by Adam Golaski at 11:38 AM No comments: