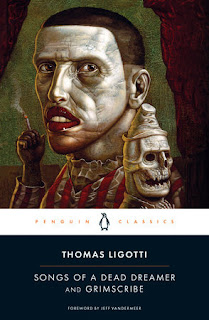 During my first graduate workshop, in addition to the stories we wrote and workshopped, we were asked to bring copies of a published story for the workshop to discuss—the idea being (I presume) that a published story has accomplished what we in workshop hoped to accomplish.
This is a standard workshop practice that’s pedagogically useful for a number of reasons: published stories can be critiqued without wounding a student’s ego, it requires students to read what they’re trying to write, it challenges the assumption that all published writing is good, & it tests the instructor’s ability to discuss work the instructor didn’t select for the course. It’s also a practice abused by lazy instructors who don’t want to plan a course. OK—so long as the instructor is an able critic.
My instructor was not an able critic.
Admittedly, I selected a story I assumed would frustrate him, which is obnoxious of me. I chose “Dream of a Manikin” from Thomas Ligotti’s Songs of a Dead Dreamer—multiple dreams w/in dreams, very little action to speak of, literary references (to Madame Bovary & the Zhuangzi), & Ligotti’s style are all elements anathema to my instructor, a devotee of 1970s/80s American realism. I was embarrassed for him when, after allowing a few students to comment on the story, he dismissed it out of hand by telling us he looked it up online and on one of the fan sites he found Nabokov’s name misspelled. I was flummoxed. What did a Ligotti fan site have to do with our analysis? Why was my instructor Googling the story for answers like a high school student assigned to write a book report?
I know why. He didn’t understand the story but was unwilling to admit he didn’t understand it.
But I didn’t bring the story into workshop only to reveal my instructor’s weaknesses; I sincerely hoped someone would be willing to unpack the story with me—I hoped for a discussion! I certainly didn’t understand “Dream of a Manikin.”
Since then, a Penguin Classics edition of Songs of a Dead Dreamer (paired with Grimscribe, Ligotti’s second collection) was published. I wonder how that might have impacted my instructor’s opinion? Would he have responded to the legitimizing effect of such a “serious” treatment?
(How serious? Thus far I’ve found two typographical errors [p. 12, p. 208; the former does not appear in my Carol & Graff first edition; the latter does], there are no notes, & Jeff Vandermeer’s forward is slight. Gripes aside, I’m grateful for this affordable edition—too much good horror fiction is available only in expensive, limited-run editions. The Penguin makes it possible for me to teach Ligotti—as I’m doing this semester.)
If a parody of a Ligotti story was to be written, it would be “Dream of a Manikin.” Minus a high-peaked attic & masks, it’s got all the Ligottian elements! Psychiatry bordering on mysticism (AKA bad psychiatrists), dreams within dreams (within dreams), the aforementioned non-genre literary references, manikins (“dollings”/puppets), self-loathing gods (& self-loathing in general), the cosmos (“star-clustered blackness”), & un peu de français. I don’t suppose I would bring it to workshop now. Maybe instead “The Sect of the Idiot.”
Posted by Adam Golaski at 11:45 AM No comments: